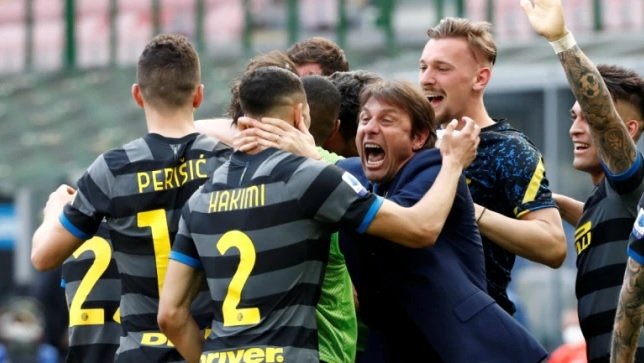 Inter Milan manager Antonio Conte celebrates with players after they claim their first Serie A title in 11 years. (Photo: Reuters)

Inter Milan clinched their first Serie A title in 11 years on Sunday after Sassuolo drew 1-1 with second-placed Atalanta to assure Antonio Conte’s side of the league crown.

Inter are 13 points clear in first place with four games remaining, and their triumph ends a run of nine consecutive title wins for Juventus.

* Two late goals from Cristiano Ronaldo earned Juventus a 2-1 comeback win against Udinese on Sunday to give the Turin club a precious three points in the Serie A top-four race. Juve climbed into third place on 69 points, level with Atalanta in second and AC Milan in fourth, but two points ahead of fifth-placed Napoli.

* Lionel Messi led Barcelona to a quick-fire comeback to win 3-2 at Valencia on Sunday and keep the pressure on La Liga title rivals Atletico Madrid and Real Madrid.

* Gareth Bale's stunning hat-trick earned Tottenham Hotspur a 4-0 win over relegated Sheffield United to keep them in the hunt for a top-four finish in the Premier League on Sunday (May 2).

* Mohamed Elneny and Pierre-Emerick Aubameyang scored either side of halftime as Arsenal cruised to a 2-0 away victory over Newcastle United in the Premier League on Sunday (May 2).

* Sam Burns outdueled fellow American Keegan Bradley over the back nine on Sunday (May 2) to win the Valspar Championship and capture his first US PGA Tour title. Burns fired a final-round three-under par 68 to finish 72 holes on 17-under 267 and defeat Bradley by three strokes at Innisbrook resort's Copperhead course in Palm Harbor, Florida.

* Every Roland Garros court will be allowed to be 35% full with a limit of 1,000 spectators at the beginning of the French Open amid an easing of COVID-19 restrictions, National Education, Youth and Sports minister Jean-Michel Blanquer said on Sunday. The limit will be raised to 65% - 5,000 fans - starting Jun 9 when the claycourt Grand Slam quarter-finals get underway, Blanquer told France 3 TV channel.

* Dutch winger Lieke Martens struck twice in the first half as Barcelona beat Paris St Germain 2-1 in the second leg of their Women's Champions League semi-final to go through with a 3-2 aggregate victory.

* Manchester United's Premier League match against Liverpool was postponed on Sunday (May 2) after United fans forced their way into the stadium and stormed the Old Trafford pitch to protest against the club's owners - the Glazer family.

* Seven-time world champion Lewis Hamilton won the Portuguese Grand Prix for Mercedes on Sunday (May 2) to stretch his Formula One lead over Red Bull's Max Verstappen to eight points after three races.

* Georgia's Nikoloz Basilashvili won his fifth career title and second of 2021 on Sunday when he defeated Germany's Jan-Lennard Struff in the Munich clay court final. World number 35 Basilashvili, 29, triumphed 6-4, 7-6 (7/5) against 31-year-old Struff who was playing in his first final.

* Slavia Prague secured their third Czech league crown in a row on Sunday with five matches to spare, capping a dominant season that delivered the club their 21st title overall. Slavia have 75 points, with Jablonec second on 62 having a played a game more, while Sparta are third on 59.