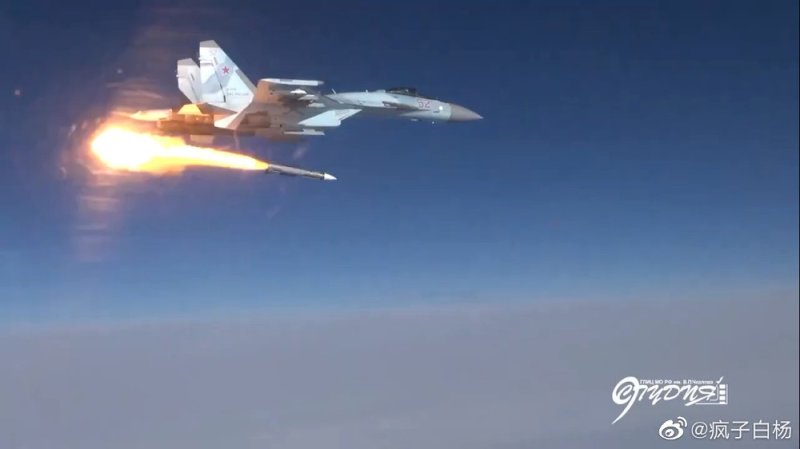 According to the Russian Defense Ministry, a Russian Su-35S reportedly shot down an unspecified Ukrainian fighter, apparently using the long-range R-37M air-to-air missile.

“According to instructions from the command post, I took off from the duty forces to the airborne duty zone. Performing air patrols, I discovered an enemy aircraft in the contact line area. I identified the aircraft, locked it, and launched a long-range missile. Convinced that the target was hit, I exited the air battle,” said Alexander, one of the Su-35S fighter pilots.

The long-range missile appears to be the R-37M (or RVV-BD), according to the observations made by veteran Indian Air Force (IAF) fighter pilot Vijainder Thakur.

Thakur posted a screengrab of the Su-35S shown in the video and pointed out that the Flanker was armed with the “full spectrum of Russian air-to-air missiles,” which included one R-37M (also known as RVV-BD) on the under-fuselage pylon, two R-77-1 missiles on under intake pylons and two R-73 missiles on wing pylons.

RuMoD has posted footage of a Su-35S armed with the full spectrum of Russian a2a missiles 1 RVV-BD on under fuselage pylon, 2 RVV-SD (R-77-1) on under intake pylons and RVV-MD (R-73) on wing pylons. The aircraft is also seen carrying a Kh-31PD. pic.twitter.com/cgZYl8AaoC

Besides that, Thakur posted another screengrab in which the R-37M is recognizable with its two sets of four control surfaces behind the nose gear.

This is probably the first time a Su-35S has been seen armed with an R-37M during Russia’s special military operation in Ukraine.

A Ukrainian Su-27 jet was reportedly shot out of the sky in October with an R-37M, allegedly fired by a Russian Su-57 fifth-generation fighter.

According to Thakur, Russia is probably stepping up using the long-range R-37M to stay out of central and western Ukraine, areas under 24×7 US AWACS covered with S-300 installations.

The R-37M is a long-range air-to-air missile (AAM) capable of hitting high-speed air targets from more than 300 kilometers.

It is also known as the AA-13 in the West or the RVV-BD, a designation used for Russian-developed variants of the R-series that were earlier manufactured in Ukraine. The RVV series is said to be more advanced and consists of Russian components only.

The missile is the product of the famed Russian research and production company Vympel, responsible for all Russian AAM families.

It is derived from the Soviet Union’s R-37 AAM, built in the 1980s for the MiG-31M Foxhound. The development of the missile began in the late 2000s.

The R-37M was initially intended to be carried by MiG-31. It was later decided to upgrade the weapon to make it more compatible with the Russian fourth-generation Su-30, Su-35, and fifth-generation Su-57 fighter jets. Experts believe the missile has the potential to improve fighter aviation performance significantly.

A dual-pulse solid propellant rocket motor powers the missile. It is guided toward its target by an onboard dual-band active radar seeker, while an inertial navigation system receives mid-course updates from the launch aircraft.

Per the manufacturer’s claims, during the terminal phase of the missile’s engagement, the seeker onboard can lock on to a target with a 54-square-foot radar cross-section at around 40 kilometers or more.

Similar to the R-37, the R-37M can reportedly carry a nuclear warhead for destroying larger formations of aircraft or missiles.

Western experts believe the missile is tailored to defeat airborne early warning and control (AEW&C) aircraft and other high-value assets. This should make the R-37M very deadly when combined with the Su-57.

The AWACS in Poland and Romania operating in 24/7 mode allegedly failed to detect the Russian fifth-generation aircraft, according to a previous EurAsian Times report.

The Su-35S aircraft began flying captive-carry missions with the R-37M in 2020, according to a report from the Russian daily Izvestia. The Flanker can reportedly carry a maximum of four R-37Ms: two under the wings and another pair below the fuselage.

By Tanmay Kadam @ eurasiantimes.com
Contact the author at tanmaykadam700 (at) gmail.com