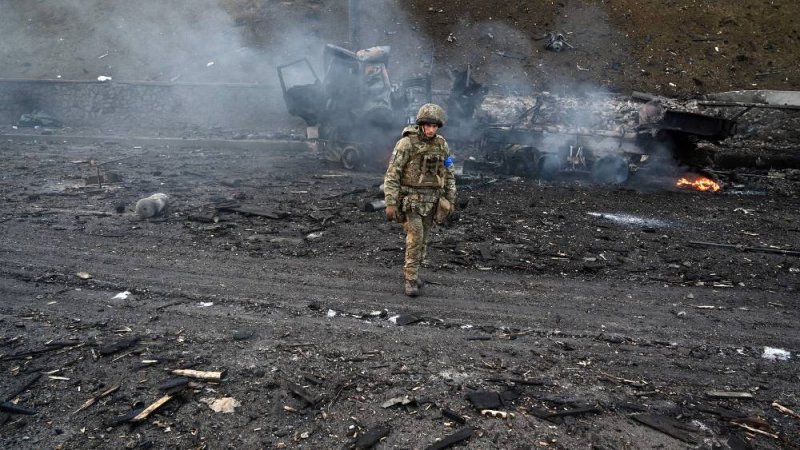 Russia’s Defence Ministry said on Thursday its forces had struck a railway station in eastern Ukraine, confirming an attack which Kyiv says also hit a residential area and killed 25 civilians as the nation marked its Independence Day.

In its daily briefing, the ministry said an Iskander missile had hit a military train on Wednesday at the station of Chaplyne that had been set to deliver arms to Ukrainian forces on the frontline in the eastern Donbas region.

Ukrainian presidential aide Kyrylo Tymoshenko said 21 people were killed when the strike hit the railway station and set five train carriages ablaze, while a boy died when a missile hit his home in the vicinity. The death toll rose to 25 on Thursday after three more bodies were retrieved from rubble, he said.

The Russian ministry said some 200 Ukrainian military personnel had died in the attack.

Reuters was unable to independently verify the reports.

Fighting in the area near the Zaporizhzhia nuclear plant, Europe’s biggest, in eastern Ukraine has emerged as a major source of concern over the past weeks, with Moscow and Kyiv trading accusations of risking a disaster by shelling the plant.

The United Nations has called for the area to be demilitarised and its nuclear watchdog, the International Atomic Energy Agency, is seeking to gain access.

On Thursday, its chief Rafael Grossi told a French broadcaster the agency was “very, very close” to being able to travel to the plant, captured by Russian forces in March but still run by Ukrainian technicians.

Safety systems at the Zaporizhzhia plant were activated on Thursday, the RIA Novosti news agency reported, after power cuts were reported across swathes of Russian-controlled territory.

As rescue operations wrapped up in Chaplyne, residents of the small town, located some 145 km (90 miles) west of Russian-occupied Donetsk, grieved for their loved ones amid the rubble of their wrecked homes.

Local resident Sergiy lost his 11-year-old son in the strike. “We looked for him there in the ruins, and he was lying here. Nobody knew that he was here. Nobody knew,” he said as he crouched next to his covered body.

Russia denies targeting civilians. It has also said that rail infrastructure is a legitimate target since it serves to supply Ukraine with Western weapons.

After Zelenskiy told the U.N. Security Council about the attack in a video message, U.S. Secretary of State Antony Blinken said on Twitter: “Russia’s missile strike on a train station full of civilians in Ukraine fits a pattern of atrocities.”

In its daily briefing, Moscow also said it had destroyed eight Ukrainian fighter jets in strikes at air bases in Ukraine’s Poltava and Dnipropetrovsk regions. That would be one of the heaviest losses for Ukraine’s air force in recent weeks.

Ukrainian regional authorities reported Russian missile strikes in the Khmelnytskyi area, west of Kyiv and hundreds of kilometres from front lines. No damage or casualties were reported.

As Russia’s ground campaign stalled in recent months after its troops were repelled from Kyiv in the early weeks of the war, it has intensified its devastating assault from the air.

In the southern Kherson region that has seen some of the fiercest fighting in the past weeks, Suspilne TV public broadcaster reported, citing local sources, explosions near the Antonivsky bridge across the Dnipro river, a major supply line for Russian troops in the area.

Reuters could not verify those battlefield accounts.

In a move that might support Western estimates of heavy Russian losses during the war, President Vladimir Putin signed a decree on Thursday increasing the size of its armed forces to 2.04 million from 1.9 million.

At a U.N. Security Council session on Wednesday, Russian Ambassador Vassily Nebenzia repeated that Moscow’s aim was “to denazify and demilitarise” Ukraine to remove “obvious” security threats to Russia.

Russia’s stance has been dismissed by Ukraine and the West as a baseless pretext for an war of conquest that has killed thousands of civilians, displaced millions, left cities in ruins and shaken the global economy, creating shortages of essential foods and sending energy prices soaring.

Yesterday, 16:01
More than 130 years old Khmer pagoda is colorful in the West

Yesterday, 15:49
Noodles Cu Ky is only available in Quang Ninh, guests over 100 kilometers to enjoy