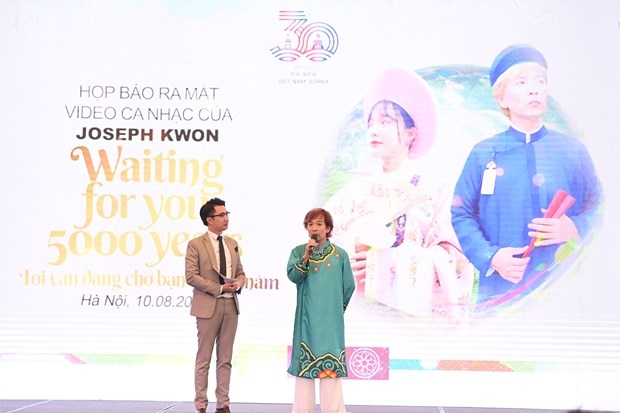 NDO - The two new music videos (MVs) “Waiting for You – 5,000 Years” and "Butterfly flakes" by Republic of Korean singer and composer Joseph Kwon officially debuted in Hanoi on August 10.

These are meaningful musical products celebrating the 30th anniversary of diplomatic relations between the two countries (December 22, 1992 – 2022).

Joseph Kwon said he hopes the MVs will bring more Korean visitors and those from other countries around the world to Vietnam, a charming and beautiful country, to feel the culture and warm hearts of the people here.

Kwon graduated from the National Conservatory of Firenze, in Italy, and worked as the conductor of the Seoul Broadcasting System (SBS)’s choir.

In particular, the lyrics of the song “Waiting for You – 5,000 Years” were written in Korean by Park Nark Jong, Director of the Korean Cultural Center in Vietnam, with both English and Vietnamese subtitles.

The production team of PNJ Entertainment Company (RoK) made these MVs from May 17 to July 12, 2022.

When he was a child, Joseph Kwon became interested in Vietnam. During his first visit to Vietnam, he was impressed by the natural landscape, unique culture and friendly people of the country.

He moved to Vietnam for work in 2019 and attended culture and music events in the country including the Korea-Vietnam Culture Fair 2020 in Hanoi and Music Talk by Radio the Voice of Vietnam.

He has also launched “Go Vietnam Go Go”, “Cha Ca or Peace”, “You Are in My Heart” and “Remember”.

Addressing the event, Deputy Director General of the Vietnam National Administration of Tourism Ha Van Sieu said he appreciates Kwon’s love for the nature, people and culture of Vietnam, stressing that his brilliant MVs make the beauty of Vietnamese tourist destinations shine through, and expects the MVs will promote Vietnam’s landscapes globally.