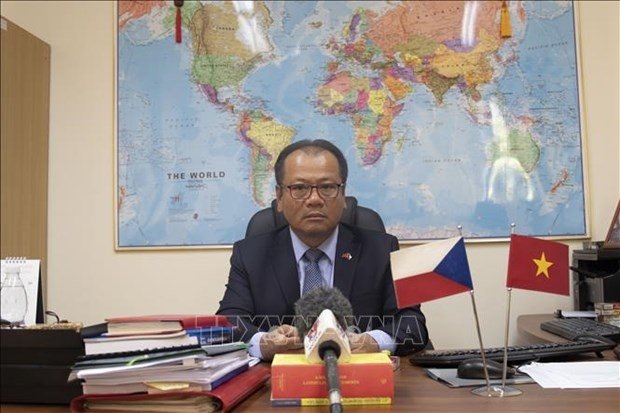 NDO/VNA – The Vietnamese Embassy in the Czech Republic will add an annotation on the holders’ place of birth inside the new passports if Vietnamese citizens need, according to Ambassador Thai Xuan Dung.

The move came after the Czech Embassy in Hanoi sent an official note to the Ministry of Foreign Affairs’ Consular Department, rejecting to recognise Vietnam’s new-style passports which have navy-blue covers from July 1, 2022.

Dung said the embassy is actively coordinating with Vietnamese authorities in working with the Czech side to address the issue.

According to an announcement released by the Embassy on August 2, it will add an annotation on the place of birth on Page 4 of the new passports to facilitate the Vietnamese holders to apply for visa extension or other public administrative services in Czech.

Holders of passports issued before August 2 can visit the embassy for annotations to be added, and receive them back the same day, Dung said.

By the end of July, the Vietnamese Embassy in the Czech Republic had issued about 50 new-style passports to Vietnamese citizens, mainly for newborn children and those lost their passports, Dung said.

The Czech Republic is among the three European countries having denied the recognition of Vietnam’s new passports. The others are Germany and Spain.

Meanwhile, most of countries in the world still recognise the new version of the Vietnamese passport.

To create favourable conditions for Vietnamese citizens to work, study, and travel abroad, the Ministry of Public Security and the Ministry of Foreign Affairs are working with partners of Germany, Spain, and the Czech Republic to deal with the technical issues.

At the Government's regular press briefing on August 3, Spokesman of the Ministry of Public Security Lt. Gen. To An Xo announced that the ministry has decided to allow annotations on place of birth to be added to Page 4 of new passports.