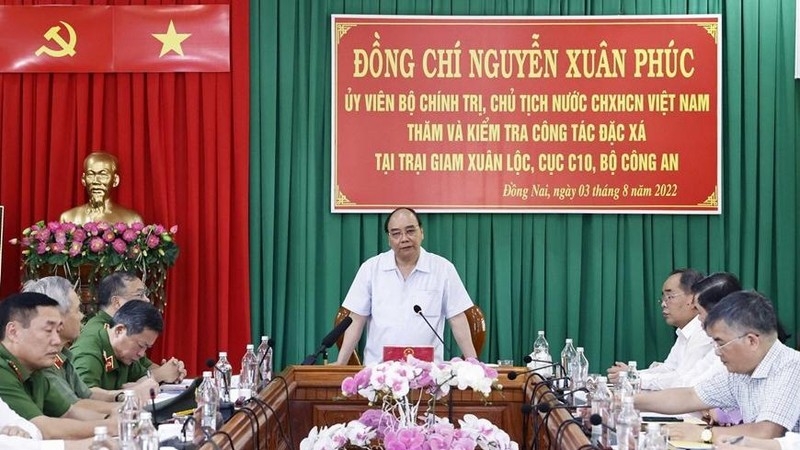 NDO/VNA - President Nguyen Xuan Phuc on August 3 inspected the implementation of the 2022 special amnesty work at Xuan Loc prison in the southern province of Dong Nai.

The leader highlighted the political and social significance of the policy, saying that it manifests the humanitarian advocacy and special leniency of the Party and State towards prisoners who show good behaviour and high determination to rehabilitate themselves.

He noted that since 2007, seven amnesty decisions were implemented, allowing more than 87,000 prisoners to go free before their prison terms.

Over the past time, the amnesty work has been carried out cautiously, objectively and democratically in accordance with regulations and ensuring political and legal requirements, helping affirm the consistent guidelines and policies of the Party and State in promoting and protecting human rights in a fair and equal way for all citizens, including those serving their prison sentences.

President Phuc asked prisons and detention centres to ensure that the amnesty benefits the right persons without any wrongdoings, mistakes or violations of regulations, thus ensuring the humanitarian meaning of the policy.

He also stressed the need to organise courses for prisoners eligible for amnesty on regulations on community reintegration and the leniency policy of the Party and State.

Party committees, authorities, and relevant organisations in localities should enhance their support for released prisoners so that they can quickly reintegrate into society, he added.

The leader signed a decision on amnesty on the occasion of the 77th anniversary of National Day (September 2, 1945-2022).