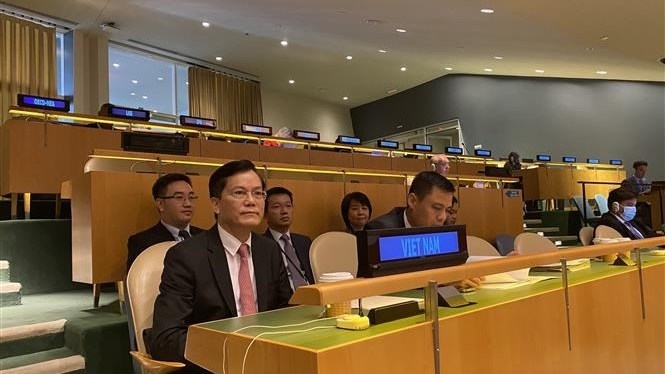 The discussion was a side event of the Tenth Review Conference of the Parties to the Treaty on the Non-Proliferation of Nuclear Weapons (NPT).

The official also affirmed that Vietnam has seriously and fully fulfilled its national obligations to the International Atomic Energy Agency (IAEA) and pledged to continue supporting the agency’s central role in the use of nuclear technology for peaceful purposes.

On the same day, Ngoc met and worked with UN Assistant Secretary-General for Strategic Coordination Volker Turk, and heads of delegations from the UK, Kyrgyzstan, Norway, Romania, Slovenia and Australia to discuss bilateral issues, as well as international and regional situations, and priorities to be promoted at this Review Conference and cooperation at multilateral forums, especially at the United Nations.

Ngoc affirmed Vietnam's consistent policy in promoting the balance of the three pillars of the Treaty on the Non-Proliferation of Nuclear Weapons, saying that countries should continue to accelerate the process of complete elimination of nuclear weapons.

He emphasised the right of nations to use nuclear energy for peaceful purposes, as well as the important role of international law and the UN Charter in Vietnam's foreign policy.

Vietnam is always ready to cooperate and have open dialogue with other countries at international forums, especially the UN, and hopes that they will support its candidacy for the UN Human Rights Council in the 2023-2025 term, he added.