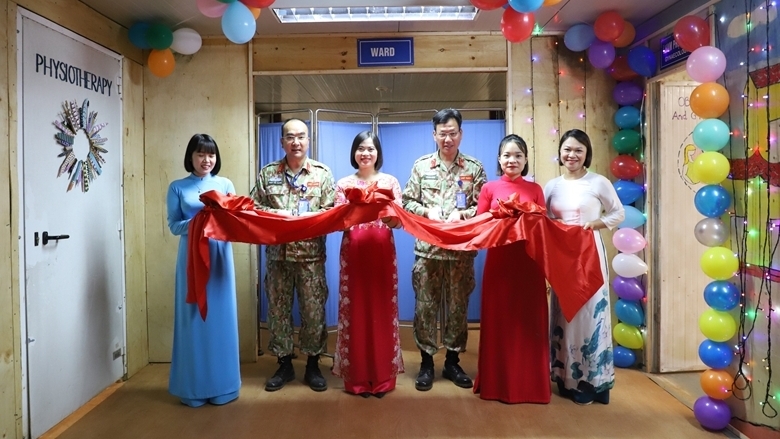 The inauguration of the obstetrics clinic.

NDO/VNA - Level-2 Field Hospital No. 4 of Vietnam, which perform duties at the UN Mission in South Sudan (UNMISS) in Bentiu, has inaugurated an obstetrics clinic, according to the Vietnam Department for Peacekeeping Operations.

On the occasion, an action programme themed “joining hands for women's health” was also launched.

This is the first clinic of this kind built at a field hospital of Vietnam during the country’s four-term deployment at the UNMISS.

In parallel with completing the clinic's facilities, the hospital’s board of directors actively developed a plan to implement the programme, under which it will conduct obstetric and gynaecological screening for about 50 high-risk women at the mission.

According to Lieutenant Colonel Vu Minh Duong, Director of Level-2 Field Hospital No. 4, the programme has contributed to strengthening the role and position of women in the peace process in the region.

This is a spirit that is completely consistent with the UN's policy and orientation in solving peaceful problems in the host country, he said.

Lieutenant Colonel Pham Tan Phong, Deputy Director of the Vietnam Department for Peacekeeping Operations, who is also Commander of the Vietnamese peacekeeping force in South Sudan, praised tireless efforts of all staff of the hospital during the initial deployment period at UNMISS, expressing the hope Vietnamese doctors and nurses will continue to do well their professional duties at the mission.