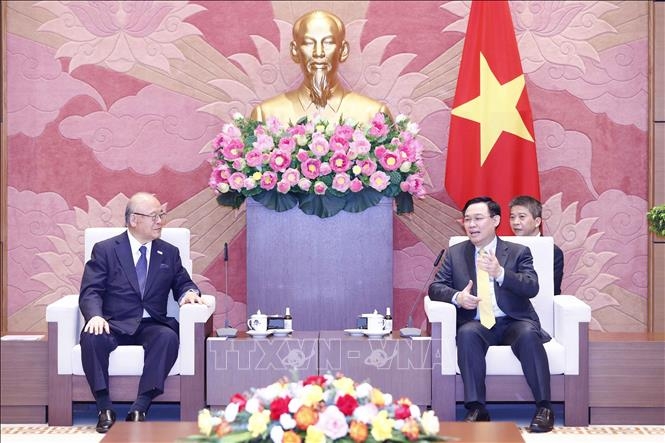 Lauding activities run by the JVFPA and its Vietnamese counterpart as well as contributions of Takebe in strengthening the nations’ friendship over the years, Hue highlighted the Vietnam-Japan University (VJU) project, and bilateral cultural and people-to-people exchanges.

For his part, the Japanese special advisor informed his host that in 2013, he was appointed to his post serving the promotion of the project, and that his current visit aims at attending the university’s first graduation ceremony. He thanked Hue for helping tackle difficulties facing the project.

Hopefully, the VJU will be a "lighthouse" and a symbol of the cooperation relationship between the two countries, said the NA leader.

To mark the 50th anniversary of the countries’ diplomatic next year, Takebe suggested planting Japanese and Vietnamese trees and building an innovation centre at the university. Commending the ideas, Hue said Vietnam has planned the diplomatic celebration.

Takebe said that currently, there are many Vietnamese interns coming to study and work, contributing significantly to Japan’s economic development of Japan.

Japan is making effort to reform the mechanism to support Vietnamese interns for their work and further study, and to build a safer and more encouraging environment for them, he said.

Takebe hoped to promote cooperation and exchange between parliamentarians and leaders of localities of the two sides via the organisation of seminars and talks.

Agreeing with his guest, Hue recommended the countries, based on their sound political and diplomatic ties, continue to fortify the connection between the two economies' development strategies, boost new production capacity, strengthen their links for human resources development, and promote cooperation between Vietnamese and Japanese localities.

The top legislator welcomed the reform of the mechanism for Vietnamese trainees in Japan and expected the two countries to continue to collaborate to improve the effectiveness of this cooperation mechanism. Research should be conducted to promote labor collaboration suitable to the nations’ respective conditions in the time to come, he suggested.

Hue expressed his gratitude and wished that the Japanese Government and people continue to pay attention to creating favourable conditions for more than 450,000 Vietnamese people studying, living and working in their country.

The NA leader took the occasion to convey his condolences over the death of late Japanese Prime Minister Abe Shinzo – a close friend of Vietnam, who passed away suddenly on July 8. Expressing his gratitude, Takebe Tsutomu emphasised that the late PM was the one who opened a period of brilliant development in the Vietnam-Japan relations.

Hue also conveyed his greetings and invitations to visit Vietnam to the speakers of the Japanese House of Representatives and National Diet.

Today, 17:29
After 5 consecutive reductions, the home gasoline worth might flip to rise once more

Today, 17:19
How MAXHUB built its channel through a genuine commitment to the ANZ market

Today, 17:12
POLY English offers scholarships up to 40% to welcome students back to school