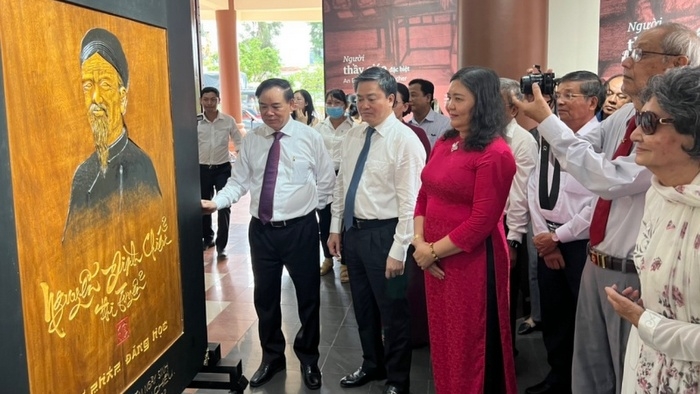 At the exhibition (Photo: NDO)

NDO – An exhibition themed “The life and career of Nguyen Dinh Chieu” officially opened at the special national monument and tomb dedicated to the celebrity in An Duc commune, Ba Tri district, Ben Tre province, on June 28.

On display are more than 300 artefacts, documents and photos of the homeland, family and literary career of Nguyen Dinh Chieu.

Various literary works by the celebrity including the epics 'Luc Van Tien' (The Tale of Luc Van Tien) and 'Van Te Nghia Si Can Giuoc' (Funeral Oration for the Partisans of Can Giuoc), as well as research projects about him are also showcased at the exhibition.

Nguyen Dinh Chieu (1822-1888), who was born in Binh Duong, Gia Dinh province (now District 1, Ho Chi Minh City), was a patriotic teacher and poet of southern Vietnam in the second half of the 19th century.

On November 23, 2021, UNESCO passed a resolution to commemorate Nguyen Dinh Chieu during his 200th birth anniversary.