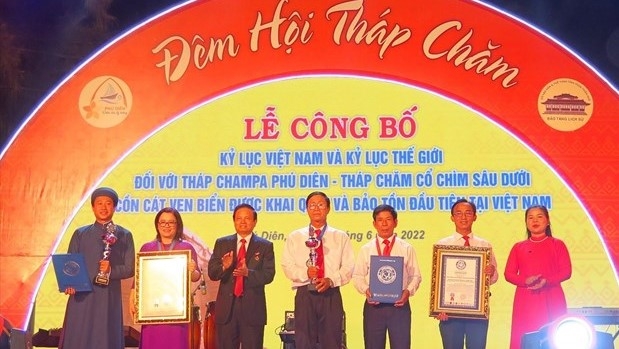 NDO/VNA – The History Museum of the central province of Thua Thien - Hue on June 27 held a ceremony to announce the national and world records for the local Phu Dien Cham Tower, as it has been recognised the first ancient Cham tower sinking deep under the coastal sand dunes to be excavated and preserved in Vietnam and the world.

In April 2001, the tower was discovered in the coastal sand dunes of Phu Dien commune, Phu Vang district. It is buried in the sand from 5-7m under the ground.

Director of the museum, the overall view of the building is a rectangular architectural block that gets smaller toward the top. It is one of the earliest remaining Cham brick structures in the central region, dating back to around the 8th century.

With such values, the tower, accredited as a national architectural and art relic since December 2001, earned its record recognition by both the Vietnam Records Organisation (Vietkings) and the World Records Union (WorldKings) this year.