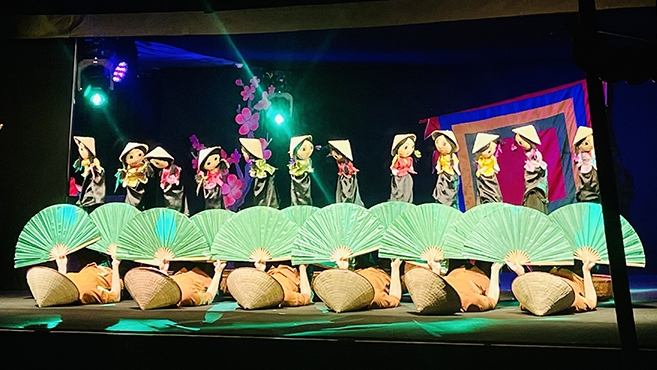 A puppetry performance staged by Vietnam Puppetry Theatre for tourists following the full reopening of tourism. (Photo via NDO)

NDO – Attracting tourists through traditional theatrical products is a direction that has been considered for a long time. However, it is not easy to create an effective engagement between tourism and the traditional stage.

It can be seen that the connection between tourism and stage brings about a mutually beneficial relationship. Thanks to artistic performances, the tourism sector can diversify products, increase the attractiveness of tour schedules, and attract a large number of tourists.

On the contrary, thanks to tourism, traditional stages also have more “land” for performances and funds to reproduce, preserve and promote. This is also an effective way to spread and promote the country's traditional cultural values to international friends. That is why several countries around the world have invested in building theatrical productions in key areas to serve tourists such as Russia with ballet shows, Japan with Noh drama, China with its traditional opera and Cambodia with the programme “Angkor smile”.

However, Vietnam, which possesses a huge cultural heritage treasure, lacks traditional art products associated with the national tourism brand. Other than puppet shows by Thang Long Puppetry Theatre, Vietnam Puppetry Theatre and Rong Vang (Golden Dragon) Water Puppetry Theatre which are regularly included in tours of travel companies, other cultural heritages such as Tuong (classical drama), Cheo (Vietnamese traditional opera) and Cai luong (Vietnamese reformed opera) have not reached many opportunities to approach tourists, especially international visitors. Over the past years, several localities and units have also operated tourism stages with traditional art products. However, many models were forced to close and operate in moderation or have not resonated.

Explaining this, many experts said that compared to other traditional arts, puppetry has more advantages in terms of language expressed mainly through puppets’ movements. Moreover, water puppetry is also a uniqueness of Vietnam so it has a special attraction for foreign tourists. Meanwhile, most of the remaining forms use dialogues, which causes many difficulties for visitors who do not understand the local language.

However, according to experts, these are challenges that the country's traditional arts can conquer based on the investment in terms of knowledge and professional experience of skilled artists to make high-quality and attractive products while preserving the identity of art forms.

People's Artist Thanh Ngoan, Director of Vietnam Cheo Theatre, said over the past years, the theatre has developed the project tourism stage with unique programmes that were designed flexibly to facilitate the selection and arrangement of visitors' schedules. The theatre has also promoted this model to several travel agencies; however, the result has not been as expected.

Similarly, Vietnam Tuong Theatre has also built products specifically for tourists, which were translated into different languages as well as organised many customer conferences with the participation of travel agencies adjusting and perfecting the products. Pham Ngoc Tuan, Director of Vietnam Tuong Theatre said that the performances of Tuong artists around the pedestrian streets in Hanoi attract the attention and interest of many visitors, especially internationals.

This showed that foreign visitors are very interested in traditional Vietnamese art products. However, there have not been coordination mechanisms and policies to create motivation and convenience for travel companies.

Meanwhile, traditional art units lack qualified human resources to market art products and do not have the mechanism and funds to hire professional teams. As a result, it is very difficult to create a spillover effect for the products. Therefore, in recent years, the Vietnam Tuong Theatre has persistently brought this traditional art form to universities, especially those having departments in tourism, to foster the understanding and love of traditional arts among the future workforce of the tourism industry.

The Director of Vietnam Tuong Theatre noted that it is crucial to create a legal corridor, mechanisms and policies for tour operators to promote traditional arts to visitors and benefit from traditional art products so that Vietnam’s traditional arts can be turned into attractive tourism products.

According to People's Artist Trinh Thuy Mui, Chairwoman of the Vietnam Stage Artists Association, each traditional art unit must have its direction to find a way to help visitors understand and be eager for art products. People’s Artist Trieu Trung Kien, Director of Vietnam Cai Luong Theatre, noted that the role of the state management agencies in charge of culture and tourism is very important to develop the methods and mechanisms for action programmes.

In addition, according to representatives from art units, it is necessary to take into account the synchronous factors to satisfy the needs of tourists. People's Artist Nguyen Tien Dung, Director of Vietnam Puppetry Theatre, said tourists are potential objects, but art products must be suitable for their journeys. Many theatres have faced difficulties to access visitors because their locations are too far from the central area, or close to famous tourist destinations.

In the reality in many countries, representatives from the theatres realised that traditional arts have been strongly invested to become key products in the performing centres with many accompanying entertainment facilities, amusement parks, shopping malls, and food courts. In the long term, Vietnam also needs to have a strong investment to have an entertainment and art complex, which includes traditional art units with unique products for tourists. The “precious capital” of our ancestors can be widely promoted to the world when attracting a large number of tourists.