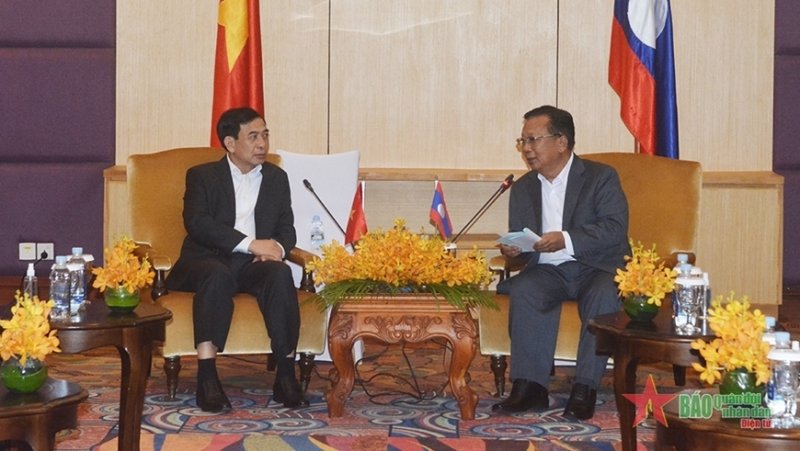 NDO/VNA - Minister of National Defence General Phan Van Giang had bilateral meetings with his counterparts from Laos, Japan and Cambodia on June 21 while he was in Phnom Penh, Cambodia for the 16th ASEAN Defence Ministers’ Meeting (ADMM).

In their meeting, Deputy Prime Minister and Defence Minister of Laos General Chansamone Chanyalath thanked the Government and Ministry of National Defence of Vietnam, particularly military units stationed along the border with Laos, for their timely support at the time of hardship.

The two sides agreed that their ministries will closely coordinate with each other to organise activities to celebrate the Vietnam-Laos and Laos-Vietnam Solidarity and Friendship Year 2022, and implement the cooperation plan for this year.

Giang also took the occasion to express his deepest thanks to the close coordination of Lao military units in searching and repatriating remains of Vietnamese volunteering soldiers and experts killed during the war in Laos.

The Vietnamese minister asked the Japanese Ministry of Defence and Minister Kishi himself will work for the smooth implementation of cooperation projects on strengthening maritime law enforcement capacity building, addressing war aftermath, and search and rescue.

Minister Giang invited the Japanese minister to Vietnam Defence 2022, an international defence exhibition and conference hosted by Vietnam for the first time this December, and also welcomed Japanese defence companies to join as exhibitors.

Both ministers agreed that the two ministries will closely work together to organise bilateral defence cooperation activities in the coming time, contributing to the success of the Vietnam-Cambodia, Cambodia-Vietnam Friendship Year 2022 and deepening the countries’ relations.