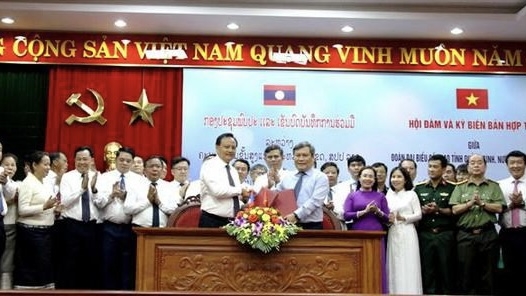 NDO/VNA – High-ranking delegations of the central province of Quang Binh and Savannakhet province of Laos held talks and signed a new cooperation agreement in Dong Hoi city on June 19.

The two sides briefed each other on the socio-economic, defence-security situation and the building of the Party and administration of each province, while reviewing their collaboration outcomes over the years.

They shared delight at important achievements that both sides have reached in many fields such as politics, economy, socio-culture, defence, security and external relations, as well as their growing ties.

The leaders of the two provinces signed the minutes of the talks, which include important development cooperation contents.

Accordingly, the two sides agreed to continue to increase the exchange of high-ranking delegations and border working teams as well as delegations from Party and administration agencies and organisations to share experience with each other in particular areas.

They concurred to sign their cooperation agreement every two years.

They will continue to promote communications among locals, especially youngsters, on the traditional friendship, special solidarity between the two nations, Parties and States as well as between Quang Binh and Savannakhet in particular.

Both sides will encourage and create optimal conditions for each other’s businesses and investors to cooperate in renewable energy, trade, tourism, services and production, while exchanging information and experience to promote their tourism potential.

They will work closely with each other to organsise trade fairs and strengthen bilateral trade partnership, while supporting each other in difficult circumstances for common development. They will coordinate closely in holding activities to mark the 60th founding anniversary of diplomatic relations between the two countries and the 45th anniversary of the signing of the Vietnam-Laos Treaty of Amity and Cooperation in 2022.

Quang Binh will help Savannakhet train 20 college and university students each year in the 2022-2023 and 2023-2024 academic years. The two provinces will propose the two governments allow the opening of Chut Mut-Lavin border gate.

The two sides also agreed to increase border law popularisation among local residents, and work closely together to deal with arising problems related to the national borders in line with the treaty on land border and border gate management between the two countries.

At the same time, they will conduct regular border patrols, ensure security in border areas, combat drug trafficking and smuggling along the shared border, and enhance mutual judicial support. They will also encourage the partnership in other fields in line with the demand and capacity of each province.

Yesterday, 21:42
World oil costs all of a sudden “circled” after repeatedly plummeting