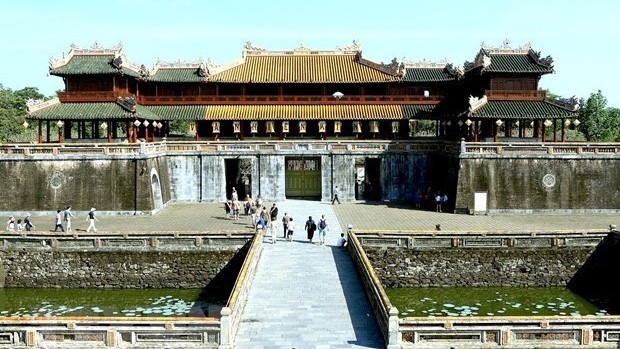 The Imperial Citadel in the Complex of Hue Monuments. (Photo: VNA)

NDO/VNA – The Hue Monuments Conservation Centre celebrated its 40th founding anniversary on June 10, a milestone on the path to recover and bring into play values of the Nguyen Dynasty’s tangible and intangible cultural heritages.

Tran Dinh Thanh, Deputy Director of the Cultural Heritage Department at the Ministry of Culture, Sports and Tourism, said the centre is considered a role model in relic conservation and restoration in Vietnam, and that Hue city of central Thua Thien-Hue province, a destination with five heritages, is a brand of Vietnamese tourism and also a top choice of domestic and foreign visitors.

He asked the centre to continue diversifying services at the Complex of Hue Monuments, rehabilitating relics, and applying digital technology to popularise the complex so that the site will become a magnet for tourists.

Director of the centre Hoang Viet Trung said the Hue cultural heritages have escaped from the status of being in need of urgent safeguarding and are gradually having their original look restored.

Over the last four decades, the centre has preserved and rehabilitated hundreds of relics in the complex, including Ngo Mon (Noon Gate), Hien Lam Pavilion, The Mieu Temple, Duyet Thi Duong Theatre, and Dien Tho, Thai Hoa, and Kien Trung palaces. It has also recovered some of the most important royal festivals of the Nguyen Dynasty (1802 - 1945).

The centre now has cooperative ties with over 30 international organisations and tens of institutes, universities, and sectors of Vietnam to carry out studies, heritage conservation, and cultural exchange.