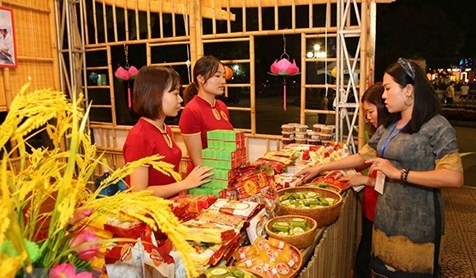 The event introduces the best dishes of the capital. (Photo: VNA)

The event gathers hundreds of handicraft villages, artisans and food suppliers in the city and throughout the country.

The festival introduces the top dishes of the city and some neighbouring localities, typical handicraft villages, which offer tourism services, and demonstrations of traditional handicrafts.

This festival aims to advertise the images and destinations of Hanoi’s tourism and introduce local cuisine to both domestic and foreign visitors, said Nguyen Thi Mai Anh, deputy director of Hanoi Investment, Trade and Tourism Centre, at the recent opening ceremony.

The event highlights the importance of cuisine and handicraft villages as tourism products to contribute to the local economy and preserve intangible heritage, she said.

Hanoi has been considered a hub of delicious dishes, which represent the creativity and talent of local residents.

She said that the city had been voted as a city with alluring cuisine by various international travel magazines.

Hanoi hosts more than 1,350 handicraft villages, many of which are popular destinations for tourists.

The festival will last until May 23, and is part of a series of activities to advertise the capital as a safe, friendly and attractive destination.