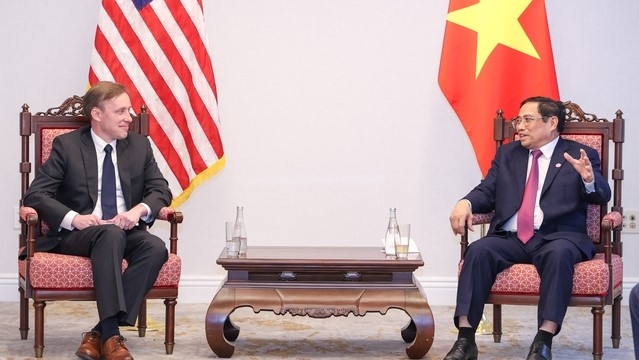 NDO/VNA – Visiting Prime Minister Pham Minh Chinh had a reception for US National Security Advisor Jake Sullivan in Washington DC on May 13 (local time), part of his activities while on a working visit to the US and the United Nations.

The PM spoke highly of the role and efforts by the US National Security Council in coordinating with the ASEAN member countries to organise the ASEAN-US Special Summit, thereby demonstrating President Joe Biden administration’s strong commitment for the bloc and the region.

PM Chinh said since Vietnam and the US normalised their relations, they have cooperated sincerely, reliably, and responsibly with the willingness for constructive exchange of ideas and dialogues when there are differences, thus overcoming difficulties and maintaining a positive development momentum together. In recent years, there has been significant progress following the direction and vision agreed upon by the two countries' senior leaders during Vietnamese Party General Secretary Nguyen Phu Trong’s visit to the US in 2015.

The Government leader affirmed Vietnam always considers the US one of its most important partners, and wished for joint work to continue deepening the countries’ comprehensive partnership toward practical outcomes and stability, meeting the sides’ legitimate interests and actively contributing to peace, stability, cooperation and development in the region and the world at large.

He suggested the US further support Vietnam in overcoming the consequences of the war; building an independent and self-reliant economy; pressing ahead with technological and digital transformation; and integrating substantively and effectively into the world.

Other sectors for such assistance include supply chains diversification and climate change response, he added.

The US official shared the PM’s idea that sincerity, trust and responsibility are the motto for the positive relationship between the two countries.

He affirmed the US respects independence, sovereignty, territorial integrity as well as differences in the political systems between his country and partners, stressed the US attaches importance to relations with Vietnam, and spoke highly of Vietnam’s ability to overcome challenges. The official pledged to continue providing support to Vietnam to cope with such challenges as the COVID-19 pandemic, climate change, and risks of supply chain disruption.

The two sides agreed on the central role of the ASEAN in dealing with regional problems as well in the US’s efforts to intensify its cooperation with Asia – Pacific and the Indian Ocean regions. The US official agreed with the PM’s proposal on the need to further clarify the connotation of the initiative on the Indo-Pacific economic framework of the US.

They also stressed the importance of ensuring peace, freedom, security and safety of navigation and aviation in the East Sea, and of settling disputes by peaceful measures on the basis of international law, including the 1982 United Nations Convention on the Law of the Sea (UNCLOS), helping maintain peace, stability, cooperation and development in the region and the world over.