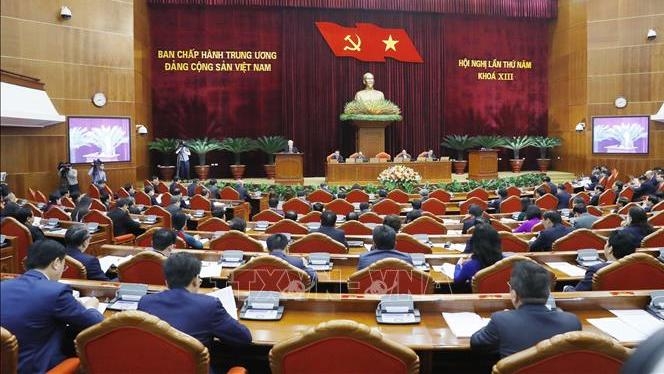 The meeting, which opened in Hanoi on May 4, is scheduled to last until May 10. (Photo: VNA)

NDO/VNA – The 13th Party Central Committee looked into a project reviewing the 20-year implementation of a resolution on continuing to reform, develop and improve the efficiency of the collective economy during its fifth plenum on May 7.

The resolution was adopted at the fifth plenum of the ninth Party Central Committee.

In the afternoon, the committee discussed in groups another project on building Party organisations and on Party members.

The meeting, which opened in Hanoi on May 4, is scheduled to last until May 10.

The issues being debated are significant to the realisation of the Resolution of the 13th National Party Congress in major areas like enhancing socio-economic development by 2030 with a vision towards 2045, and intensifying the building and rectification of the Party and the political system to meet increasing requirements of the revolution in the new period.