In his closing remarks, NA Chairman Vuong Dinh Hue summed up that the session had looked into five draft laws which had been submitted to the NA for the first time, a draft resolution on some pilot special mechanisms and policies for the development of the south-central province of Khanh Hoa, the proposed law and ordinance building program for 2023 and adjustments to the 2022 program.

The five draft amended laws under debate were the Oil and Gas Law, the Law on Domestic Prevention and Control, the Law on Radio Frequencies, the Law on Inspection, and the Law on Medical Examination and Treatment. 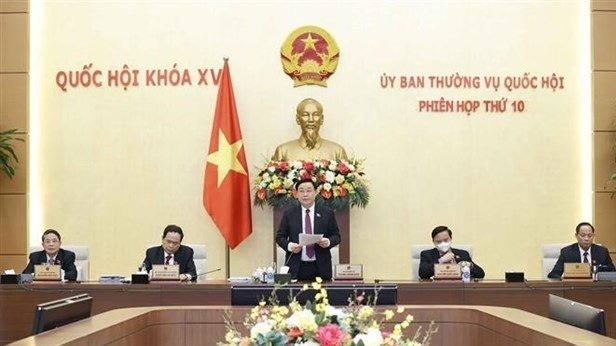 The committee agreed to include the NA’s draft resolution on Khanh Hoa Province into the 2022 law and ordinance building program, and submit it to the third NA meeting for approval.

The Government’s report reviewing the implementation of Resolution No. 42/2017/QH14 dated June 21, 2014 of the 14th NA regarding the pilot handling of bad debts by credit institutions was also tabled for discussion. The committee reached consensus on the extension of the implementation until the end of December 2023.

It also asked the Government to soon build and submit a law amending and supplementing the Law on Credit Institutions, including regulations on handling bad debts, to the NA for consideration and issuance within this year.

The legislators examined the NA’s proposed supervision program in 2023, and outcomes of the thematic supervision on the implementation of policies and laws on the planning work since the Planning Law came into force.

For the Government’s reports on the State budget balance in 2020, and thrift practice and wastefulness prevention, the committee asked the Government to complete the reports which, it said, should point out achievements as well as limitations.

Meanwhile, delegations of NA deputies were urged to step up the collection of opinions of voters and people in localities and make monthly reports.