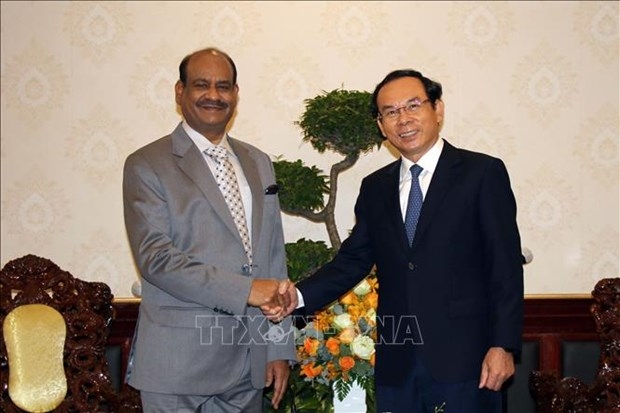 NDO/VNA – Nguyen Van Nen, Secretary of the Ho Chi Minh City Party Committee, on April 20 hosted a reception for Speaker of the Indian Lok Sabha (the lower house) Om Birla, who is on an official visit to Vietnam.

Briefing the Speaker and the parliament delegation of India on the COVID-19 prevention and control work in Vietnam and the southern city in particular in recent times, Nen thanked India for its help to the city in the fight against the pandemic. The assistance, including medical masks, drug and medical equipment and technology transfer, has contributed to the city’s efforts to overcome difficulties to keep the pandemic under control and promote economic recovery, he said.

According to the city leader, the ongoing trip to Vietnam by Speaker Birla and the Indian delegation takes place at the time when Vietnam and Ho Chi Minh City in particular have been organising numerous activities marking the 50th anniversary of the diplomatic ties between Vietnam and India (1972-2022).

Speaker Birla highlighted Ho Chi Minh City as a typical city for Vietnam in the struggle for national liberation in the past and a rising star in the national development process.

He expressed his pleasure and belief that the Indian community living and working in the southern city will contribute to act as a bridge to promote cooperation and development of the two countries’ peoples.

According to Birla, India hopes Ho Chi Minh City and Indian localities speed up cooperation in information technology that India is strong in. Besides, it is necessary to create favourable conditions for both countries’ businesses to learn about and promote cooperation and investment in tourism as India and Vietnam boast potential and strengths in the area.