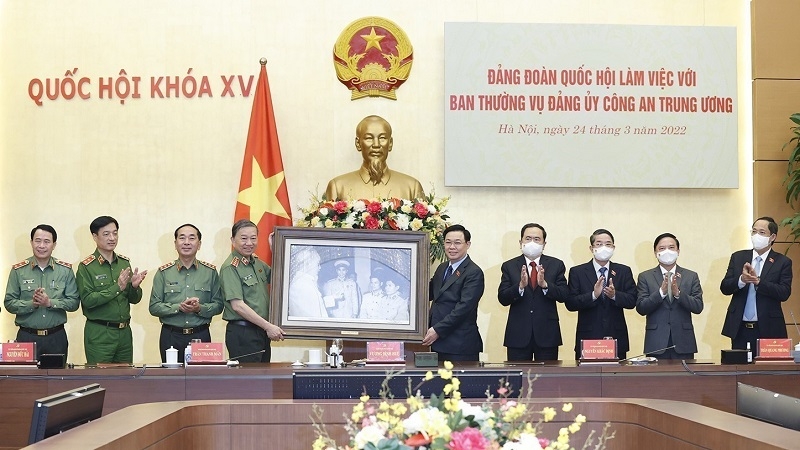 NDO/VNA - National Assembly (NA) Chairman Vuong Dinh Hue on March 24 chaired a working session between the Party Delegation to the NA and the Central Public Security Party Committee's Standing Board on the draft laws and resolutions compiled and submitted to the legislature by the Ministry of Public Security.

During the 14th NA, the ministry built and submitted 13 laws and resolutions to the legislative body. At the upcoming third plenary session of the 15th NA, the ministry will submit to the legislature a draft Law on Mobile Police, a draft Resolution on a pilot model of organising working, career consultation and vocational training activities for inmates outside the prison, a draft revised Law on Road Traffic Order and Safety, and a draft law on forces engaging in security and order protection at grassroots level, said Lam.

He said that the ministry has drastically implemented resolutions of the NA and its Standing Committee, including Resolution No. 96/2019/QH14 on combating criminals and law violations.

The ministry has also coordinated closely with NA agencies. It has signed three coordination regulations with the NA's Council for Ethnic Affairs, Committee for Defence and Security, and Office, while working closely with other NA agencies in law building and supervision activities.

Lam proposed that in the time to come, the Party Delegation to the NA and NA Standing Committee continue to strengthen the leadership and directions over the building and completion of laws related to security and order, thus creating a full and coherent legal corridor for the protection of national security and crime prevention and fight in the new situation.

Addressing the session, NA Chairman Hue said that the NA has worked to ensure the close coordination between defence-security protection and socio-economic development. He highlighted the significant role of the public security force to the country, saying that the Ministry of Public Security should coordinate closely with NA agencies to make careful preparations for the draft laws, ordinances and resolutions to be submitted to the NA and its Standing Committee with the highest quality.

He hailed the positive contributions by the Ministry of Public Security to the NA operations.

The Party Delegation to the NA and the Central Public Security Party Committee agreed to issue their coordination regulations to enhance the efficiency of their cooperation so as to meet the requirements of reality.

Both sides will work more closely together in information exchange to efficiently serve the law building and supreme supervision activities and during the deciding of important issues, external relations activities of the NA and the task performance of the Ministry of Public Security.