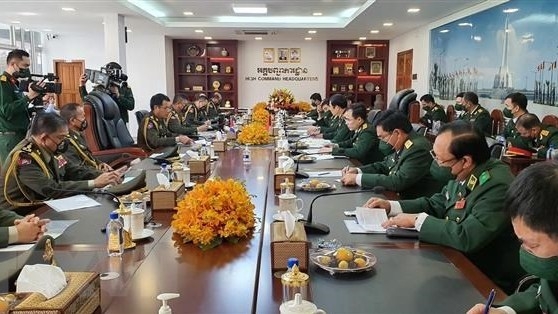 The talks between the two Defence Ministries (Photo: VNA)

NDO/VNA - Chief of the General Staff of the Vietnam People’s Army (VPA) and Deputy Minister of National Defence Sen. Lieut. Gen. Nguyen Tan Cuong held talks with Commander-in-Chief of the Royal Cambodian Armed Forces General Vong Pisen in Phnom Penh on March 18, within the framework of his official friendly visit to Cambodia.

Gen. Vong Pisen affirmed that the visit has contributed to deepening the friendship and cooperation between the two armies, and appreciated the effective support of the VPA as well as the Vietnamese Party and State for his country. According to him, this is reflected through the active contribution of the Vietnamese delegation to the success of the ACDFM-19, the annual exchange of delegations, the border demarcation and joint efforts to fight cross-border crime even during the COVID-19 pandemic.

He stated that in the context of rapid changes and complicated developments of the international and regional situations, the Cambodian Government always advocates maintaining cooperation and upholding the principle of non-interference into the internal affairs of other countries.

In order to strengthen the bilateral military cooperation, the general suggested the Vietnamese side continue to support the training of human resources for Cambodia, coordinate in the implementation of the two countries' defence protocol, and joint border patrols, and carry out rescue drills. The Cambodian side also proposed setting up a hotline between the two sides to promptly deal with urgent issues.

The Vietnamese officer congratulated General Vong Pisen on successfully chairing the first in-person ACDFM after two years of hiatus due to the COVID-19 pandemic, affirming Vietnam's commitment to supporting Cambodia in its ASEAN Chairmanship Year.

He said that the ACDFM will contribute to strengthening the Vietnam-Cambodia good neighbourliness, time-tested friendship, and sustainable and comprehensive cooperation, especially as the two are about to celebrate the 55th anniversary of the establishment of their diplomatic relations (June 24, 1967 - 2022).

Earlier the same day, Sen. Lieut. Gen. Nguyen Tan Cuong paid a courtesy visit to Cambodian Defence Minister Tea Banh, and laid flowers at the Vietnam-Cambodia Friendship Monument to commemorate the heroes and martyrs who died for independence, freedom, and peace of the two peoples.

Today, 18:13
A TROPICAL ESCAPE WITH ULTIMATE EXPERIENCES AT THE RITZ-CARLTON, BALI