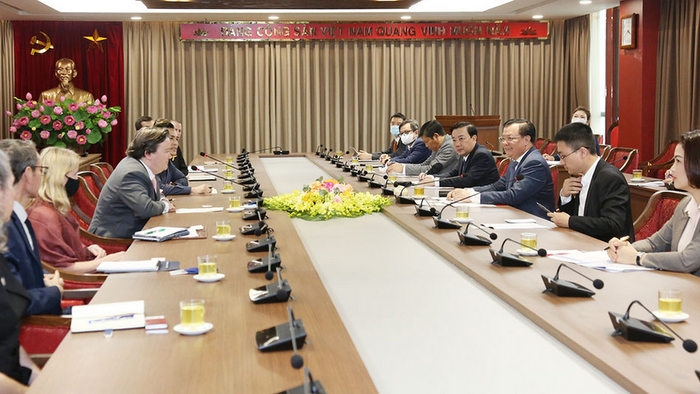 At the event (Photo: hanoimoi.com.vn)

NDO/VNA - Hanoi always gives high priority to developing its friendship and cooperation with US localities, thus contributing to deepening the relations between the two countries, Secretary of the municipal Party Committee Dinh Tien Dung told newly-accredited US Ambassador to Vietnam Marc Evans Knapper on March 15.

Over the past time, collaboration between the Vietnamese capital and the US has achieved positive results in many fields, including 316.9 million USD in the US’s foreign direct investment in the city. Regarding tourism cooperation, Hanoi is implementing the 2019-2024 cooperation programme with the US Cable News Network (CNN) to popularise the image of Hanoi to US and international tourists.

As for cooperation with US localities, the Hanoi People's Committee signed a memorandum of understanding to establish friendly and cooperative relations with the Utah state administration in 2017, and is discussing with the authorities of Los Angeles on the establishment and promotion of cooperation between the two cities, Dung highlighted.

In 2021, within the framework of US Vice President Kamala Harris's visit to Vietnam, Hanoi and the US Embassy held a ceremony to sign a land lease contract for the embassy’s new headquarters, which has become a symbol of collaboration and helped promote the development of bilateral relations between the two countries in the future.

The Hanoi leader also showed his hope that Ambassador Knapper, during his new tenure in Vietnam, will act as a bridge consolidating and fostering the relations between Vietnam and the US as well as between Hanoi and US localities.

The guest, in his turn, expressed his thanks to Vietnam and Hanoi for supporting his country’s fight against COVID-19, affirming that cooperation in health is a pillar in the bilateral relationship.

He said he hopes Hanoi will soon reopen its schools, and the US will provide possible support for the city in this issue.

Regarding economic, trade and tourism cooperation, Ambassador Knapper said the US will help Hanoi attract more tourists and investors from his country to Vietnam.