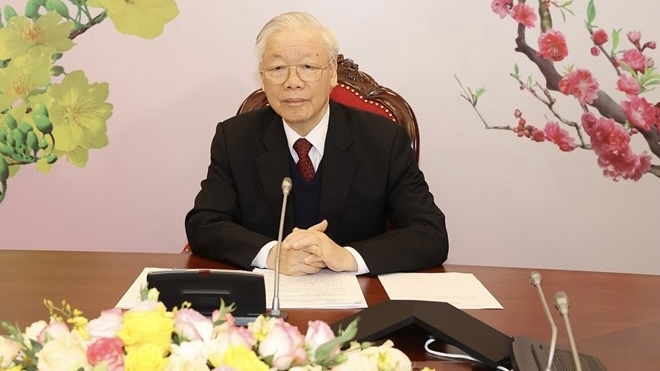 NDO/VNA - President of the Cambodian People’s Party and Prime Minister Samdech Techo Hun Sen have made phone calls, extending his greetings to senior leaders of the Communist Party of Vietnam (CPV) and the Vietnamese State on the occasion of the Lunar New Year (Tet) Festival and the 92nd founding anniversary of the CPV.

In the phone call with General Secretary of the CPV Central Committee Nguyen Phu Trong, the two leaders congratulated each other on the respective country's great achievements their Parties, States and people have gained in recent times, especially in the fight against the COVID-19 pandemic, thus helping ensure social welfare and economic development.

They expressed their delight at the fine development of the relationship between the two Parties and States, contributing to maintaining political stability and socio-economic development in each country and bringing practical benefits to the their people.

Despite difficulties caused by the COVID-19 pandemic, the two sides have maintained regular high-level meetings and exchanges in various forms, including the successful organisation of a meeting between the leaders of the three ruling parties of Vietnam, Cambodia and Laos, a State visit to Cambodia by President Nguyen Xuan Phuc, and online talks by the two countries’ Party and State leaders, they said.

The two leaders agreed that both sides should promote and expand the bilateral cooperation in various areas, including politics, security, national defence, economy and connectivity, while supporting each other at international and regional forums.

They wished the Vietnamese people happiness, peace and prosperity on the traditional festival.