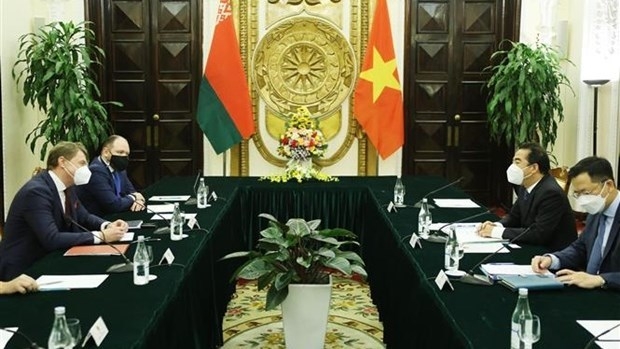 NDO/VNA – Vietnamese Deputy Foreign Minister To Anh Dung and his Belarusian counterpart Mikalai Barysevich co-chaired a political consultation between the two Foreign Ministries in Hanoi on January 12, during which both sides agreed on many measures to bolster bilateral cooperation in all fields.

The two Deputy FMs concurred to resume the exchange of delegations at all levels in the new normal situation and expand collaboration in defence, security, economy-trade, investment, education and culture-tourism as well as among localities of both countries.

Dung affirmed that Vietnam hopes to further promote the traditional friendship and all-round cooperation with Belarus.

He held that the two countries’ presenting of medical supplies to each other to fight COVID-19 last December is evidence of the close friendship between the two nations. 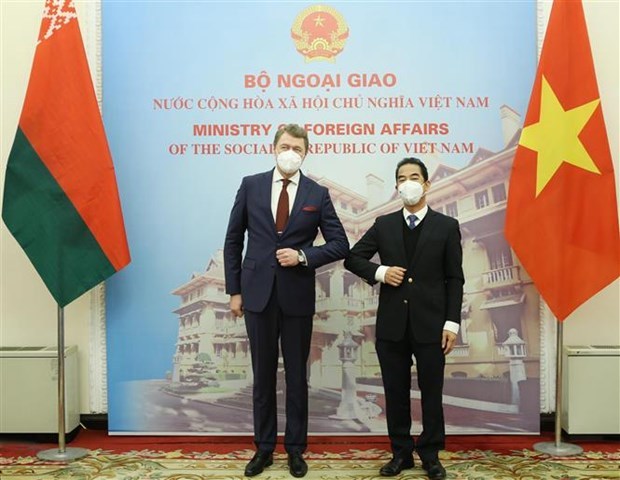 He expressed delight at the recovery in two-way trade in 2021, and proposed that the two sides further optimise the free trade agreement between Vietnam and the Eurasian Economic Union, in which Belarus is a member, to further increase trade exchange.

For his part, the Belarusian Deputy FM congratulated Vietnam on completing its tasks as a non-permanent member of the UN Security Council in 2020-2021, underlining that Belarus wants to further foster cooperation with Vietnam in all fields.

Regarding regional and international issues of shared concern, the two sides agreed that the two countries will continue working closely together and supporting each other at international forums, contributing to peace and stability in the region and the world.

On the occasion, the Belarusian Deputy FM handed over to the Vietnamese side a diplomatic note affirming that Belarus will support Vietnam’s candidacy for a seat in the UN Human Rights Council in the 2023-2025 tenure.