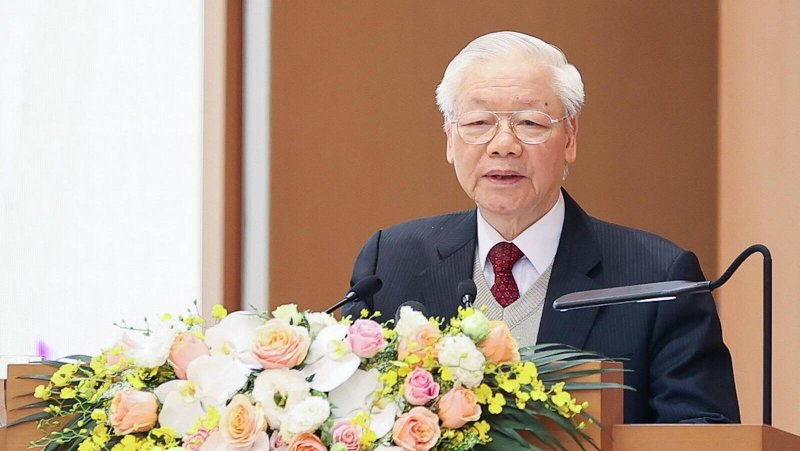 NDO/VNA - Party General Secretary Nguyen Phu Trong attended and gave directions at a teleconference between the Government and localities on January 5 to review 2021 performance and implement the Party Central Committee’s Conclusion and the National Assembly’s Resolution on 2022 socio-economic development scheme.

The Party leader highlighted that amid difficulties in 2021, the Government, local authorities and the entire political system together with the whole Party, people and armed forces had made utmost efforts to realise set targets at the highest possible level in various areas, and had reaped important achievements in most fields.

Though the economy contracted by 6 percent in the third quarter due to the fourth pandemic wave, it bounced back to a growth of 5.22 percent in the fourth quarter, compared to the 4.61 percent increase recorded in the same period last year. The full-year growth is estimated at 2.58 percent. Revenue of the State budget increased by 16.4 percent, higher than the 11.3 percent rise recorded in 2020. The total export-import value hit a record 668.5 billion USD, up 22.6 percent annually, making Vietnam one of the 20 biggest economies globally in terms of trade. The country also ran a trade surplus for sixth consecutive year that amounted to about 4 billion USD.

Impressive results were also recorded in Party and political system building. Authorities and agencies at all levels quickly implemented the Party Central Committee’s policies, resolutions and decisions with high consensus, which attracted attention from international community, he said.

In order to build on the past achievements and fix shortcomings, the Party chief asked delegates to closely review the situation, identify causes of outstanding problems and learn from lessons.

He noted that it is necessary to keep a close watch of the pandemic situation at home and abroad, especially threats from new variants of the coronavirus so as to timely take suitable responding measures and policies, while giving priority to the implementation of the comprehensive COVID-19 prevention and control programme, considering it an important and urgent task of all-level authorities and sectors from early 2022. At the same time, vaccination campaign must be hastened to quickly offer two shots to those eligible.

The Party leader required localities and sectors to effectively carry out the socio-economic recovery and development programme in tandem with pursuing the consistent goal of controlling inflation, ensuring macro-economic stability and major economic balances, continuing to improve the investment and business environment, propelling rapid and sustainable growth, restructuring the economy in combination with renewing the growth model; improving productivity, quality, efficiency and competitiveness of the economy; stepping up national digital transformation, digital socio-economy, green and circular economy and climate change adaptation.

He also laid stress on cultural development in harmony with and on par with socio-economic development to keep improving people’s material and spiritual lives.

Trong requested continuing to consolidate national defence-security capability, maintain political stability, social safety and order while improving the efficiency of external work and international integration, actively preventing and defeating all sabotage plots by hostile and reactionary forces, and absolutely avoiding being taken by surprise in any case.

It is a must to keep stepping up the building and rectification of the Party and political system, particularly the systems of law building, law enforcement and judicial agencies from the central to local level, he said, emphasising the need to build transparent, strong, effective and efficient Government and local administrations.

He called for resolutely and persistently fighting corruption and negative behaviours and hastening the progress of investigation, prosecution and trial of serious cases of public concern.

On the occasion of the upcoming Lunar New Year festival, the Party chief wished that the Government and local authorities would continue building on the past achievements, fixing existing weaknesses and shortcomings, improving the effectiveness and efficiency of leadership and directions, overcoming difficulties and challenges, and fulfilling tasks assigned by the Party, State and people.