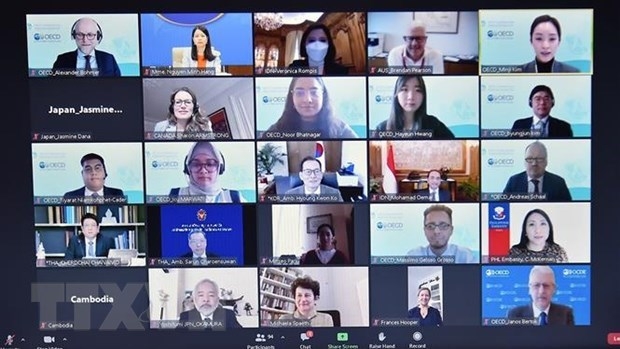 At the 8th meeting of the Steering Group of the OECD Southeast Asia Regional Programme. (Photo: VNA)

NDO/VNA – Vietnam and Australia have been officially nominated as co-chairs of the Organisation for Economic Cooperation and Development (OECD)-run Southeast Asia Regional Programme (SEARP) for 2022-2025, replacing Thailand and the Republic of Korea (RoK).

The nomination was decided at the 8th meeting of the Steering Group of the OECD Southeast Asia Regional Programme held in the form of videoconference on December 9. Assistant to the Foreign Minister and Director of the Department of Economic Affairs at the Ministry of Foreign Affairs Nguyen Minh Hang attended the meeting.

In her remarks, Hang thanked OECD and the Southeast Asia Regional Programme for their acknowledgement of Vietnam’s active and responsible contributions over the past time, pledging that Vietnam will closely coordinate with Australia to carry forward the achievements and propose priority areas.

Anthony Stannard, a representative from the Australian delegation, also affirmed Australia’s resolve to join hands with Vietnam and regional countries in the next three years when it holds the co-chairmanship.

Vietnam is the third nation in Southeast Asia to work as co-chair of the programme, after Indonesia and Thailand, which demonstrates efforts in implementing the directive of the Party Central Committee's Secretariat on enhancing and advancing multilateral diplomacy by 2030.

The position would help Vietnam prove its international role and responsibility, while utilising OECD’s consultancy and support for the country’s development goals.

The nomination also reflects OECD’s trust in Vietnam’s capacity to connect the organisation with the Southeast Asian region in the areas of shared concern.

Inaugurated by OECD Secretary-General Angel Gurría and Japanese Prime Minister Shinzō Abe at the OECD Ministerial Council Meeting in May 2014, the OECD Southeast Asia Regional Programme aims to support the region in their domestic priorities, policy reforms and regional integration efforts. The programme held its first Ministerial Conference in March 2018, to discuss issues on Inclusive ASEAN, and the next phase of the Programme.