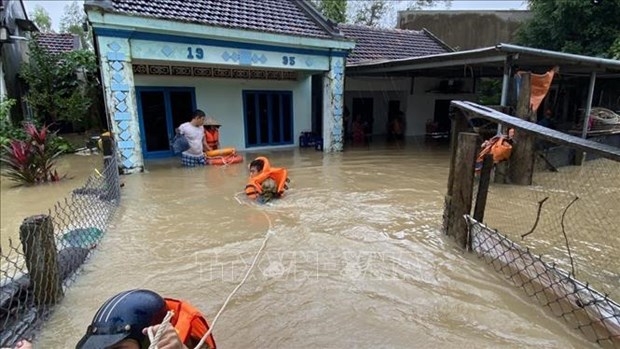 Many activities are organised to rescue and support people in flooded areas (Photo: VNA)

NDO/VNA – The Vietnam Red Cross Society (VRC) Central Committee announced on December 2 that it has decided to provide emergency relief worth 540 million VND (nearly 23,800 USD) in cash and goods for people severely affected by floods in the south central provinces of Binh Dinh and Phu Yen.

As scheduled, the relief will be delivered directly to households affected by floods on December 2.

Each locality will receive 200 boxes of goods and 150 million VND in cash.

Beneficiaries are disadvantaged families with injured people, collapsed or damaged houses, and destroyed crops and livelihoods affected by floods, people with disabilities, the lonely elderly, and women who are head of household or raising children under 5 years old.

Previously, many activities were organised by members of the VRC’s chapter in Binh Dinh and local forces to rescue and support people in flooded areas.

Heavy rains in the Central and Central Highlands regions in recent days have caused flooding, landslides, and traffic disruption, affecting tens of thousands of households.