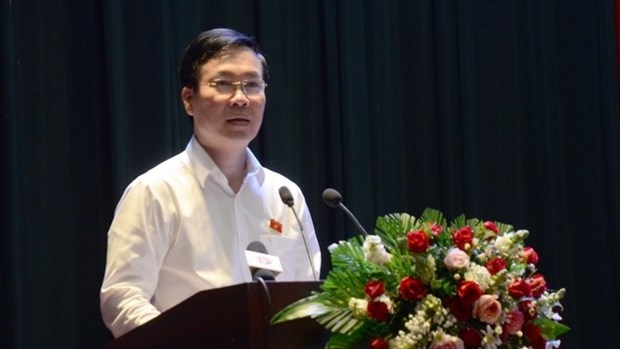 NDO/VNA – Politburo member and Permanent Member of the Party Central Committee’s Secretariat Vo Van Thuong and other National Assembly (NA) deputies of Da Nang met with voters in the central city on November 23.

Tran Chi Cuong, deputy head of the NA deputies’ delegation of the city, reported on the outcomes of the 15th NA’s second session, held from October 20 to November 13, and the delegation’s performance in the recent past.

Local voters expressed their support for the outcomes of the session, as well as the strong directions by central and municipal authorities.

Secretary of the municipal Party Committee Nguyen Van Quang, head of the delegation, called on city dwellers to uphold their sense of responsibility towards themselves and their families and stay alert to the COVID-19 pandemic.

Da Nang is striving for all eligible persons to be fully vaccinated against COVID-19 by the end of November, he noted, adding that it is also working to provide assistance for pandemic-hit people and enterprises.

Appreciating voters’ opinions, Politburo member and Permanent Member of the Party Central Committee’s Secretariat Vo Van Thuong said the 13th National Party Congress identified measures for pushing ahead with the fight against corruption and negative phenomena, and that there are no off-limits zones in this regard.

In terms of socio-economic development, he said the plan to build a financial centre in the city is a great stride, but it needs thorough, serious, and responsible preparations. Therefore, local leaders should prepare and report to central agencies early.

He added Da Nang has obtained significant development achievements, but there are also shortcomings which local officials have been striving to deal with.

Meetings between NA deputies and voters are regular activities before and after each session of the National Assembly.