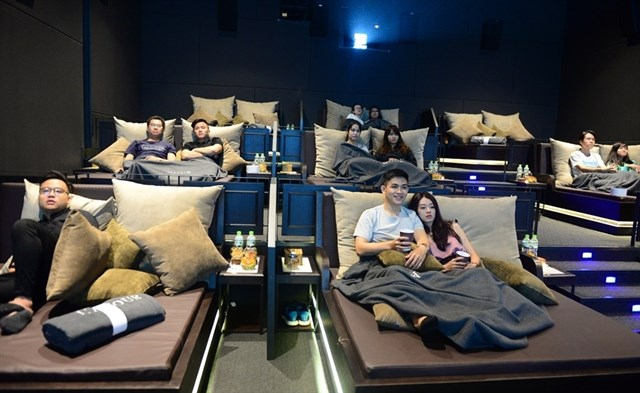 One cinema chain has cleaned all its theaters, another plans to release blockbusters like ‘Black Widow’ and ‘Suicide Squad’ to attract moviegoers as they reopen after a six-month closure.

On Facebook, the chain quickly posted its reopening information with trailers of several blockbusters and release times.

BHD was so happy as to be “in tears” to inform people about the reopening, it said further.

“We received a lot of positive feedback, the number of likes and shares on our Facebook page increased significantly, showing that the audience has been waiting for this for a long time,” Minh said.

“This is good news for movie producers and distributors. We had a meeting with producers to come up with screening schedules for new movies”.

A spokesperson for CJ HK said with many big-tickets movies waiting to be screened, the competition would be tough, and his company had to schedule releases carefully to ensure they do not overlap.

Movie distributors have prioritized the re-release of movies that were showing previously but had to stop due to the pandemic, such as ‘Thien Than Ho Menh’ (Guardian Angel).

Duong Hai Yen, a representative of CJ HK Entertainment, said in November and December three foreign movies would be released, including Thai horror flick ‘The Medium’.

Some cinemas plan to postpone the release of Vietnamese films like ‘Bay Ngot Ngao’ (Sweet Trap) to Dec. 31 and ‘Dem Toi Ruc Ro’ (Brilliant Darkness) to early next year.

But BHD will simultaneously show recent international hits such as ‘Shang-Chi and the Legend of the Ten Rings’ and ‘No Time to Die’ and a number of Vietnamese films such as ‘Lat Mat 48h’ (Face Off: 48h) and ‘ThienThan Ho Menh’.

It has reviewed the pandemic situation to schedule its show times and the number of tickets to sell in each theater.

The production of films that were stalled by the epidemic are also being speeded up in the hope of releasing them in early 2022.

BHD hopes to attract audiences since the reopening is on a weekend and Christmas is around the corner.

Minh said: “Last year when we reopened after a Covid outbreak, people were hesitant to go to theaters in the first two weeks. But after a month the number of moviegoers doubled.

“This year, with a large number of good films, we expect a boom”.

When the pandemic forced them to close for months, many film distributors and cinemas sought a government bailout because as they lost tens of billions of dong. Now they hope to quickly recover the losses.

Nevertheless, with Covid still posing a threat, they have promised to comply with preventive measures mandated by the Ministry of Health.

Staff will check guests’ temperature and disinfect their hands before allowing them to enter theaters. They will wear gloves, masks and face shields.

Yen said: “We want the audience to feel secure about going to cinemas. All theaters are implementing anti-pandemic measures according to regulations, employees have been vaccinated, seats are also distanced. Each guest also needs to scrupulously follow rules so that watching movies in a cinema can be safe”.

Nguyen Thi Mai Hoa, director of the Galaxy cinema chain, said all her staff are vaccinated and tested regularly for Covid, and have their temperature checked.

Guests have to make health declarations by scanning QR codes. Every Galaxy theater has set up a Covid safety team to train staff and respond quickly when detecting suspected cases.

Cinemas encourage moviegoers to book tickets online and use automatic entry at cinemas to avoid contact with staff.