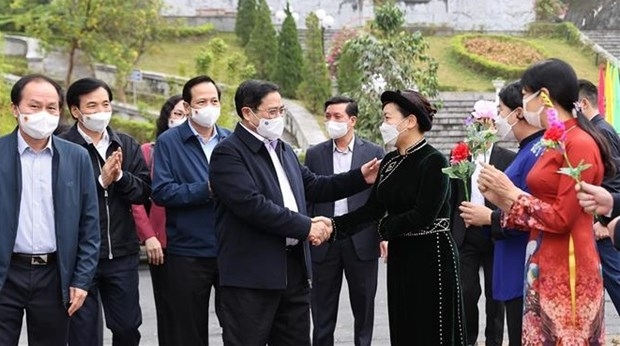 NDO/VNA – Prime Minister Pham Minh Chinh on November 15 urged the northern mountainous province of Cao Bang to step up the COVID-19 fight and economic recovery, while continue mobilising resources in the community to take care of the poor and disadvantaged groups, especially those affected by the pandemic.

The government leader made the suggestion while joining residents of Pac Bo, Nam Lin and Na Leng hamlets in Truong Ha commune of Ha Quang district in the National Great Unity Festival.

The festival was held at Pac Bo special national relic site, where President Ho Chi Minh set his first step back to the homeland after 30 years of going abroad to find the way to save the country.

The PM said unity is of strategic significance and is a basic factor to ensure the victory of the Vietnamese revolution, stressing it is the national unity that has helped to promote the nation's potential, prestige and position in the international arena.

“Therefore, we must preserve and uphold the great national unity bloc to continue the building of a law-governed socialist state, a socialist democracy and a socialist market economy,” he noted.

PM Chinh emphasised Vietnam is striving to fulfill the target of completing industrialisation and modernisation and basically becoming a modernity-oriented industrial nation by 2030, and a modern industrial country by 2045.

He lauded efforts by Ha Quang district in particular and Cao Bang in general in boosting socio-economic development and ensuring social security, helping to improve the material and spiritual life of local residents.

The leader reiterated the goals of safely and flexibly adapting to and effectively controlling the COVID-19 pandemic, and restoring socio-economic activities, and asked the province to utilise community resources in this regard.