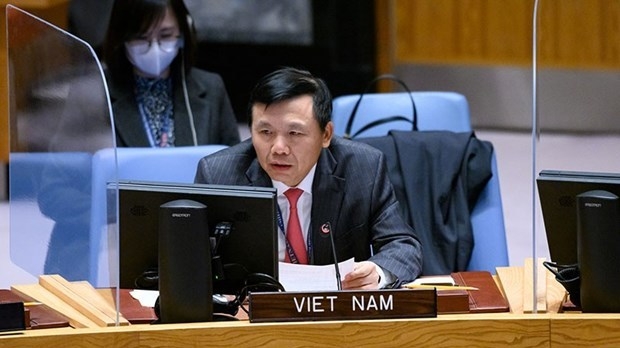 NDO/VNA – Ambassador Dang Dinh Quy, Vietnam's Permanent Representative to the United Nations, has affirmed peacekeeping continues to be an important tool to maintain international peace and security, and the UN police (UNPOL) have well done their assigned tasks and closely coordinated with military and civil units of the mission amidst escalating challenges.

He underlined the importance of prioritising, through resources and attention, the promotion of women in peacekeeping operations, including policing activities.

Further, the international community should enhance training and capacity building support to developing countries, including for women police officers, he said, noting that the percentage of Vietnamese female peacekeepers in the United Nations Multidimensional Integrated Stabilisation Mission in the Central African Republic (MINUSCA) and the United Nations Mission in the Republic of South Sudan (UNMISS) has increased to 20.6%, from 16.5% in 2020, exceeding the Secretary‑General’s target of 15% for uniform gender parity before 2028.

She said services for survivors of sexual and gender-based violence remain non-existent. Highlighting the need for increased United Nations police capacity, she urged the Council to press Sudan and South Sudan to immediately establish the Abyei Police Service.

Patricia Boughani, Police Commissioner of the United Nations Multidimensional Integrated Stabilisation Mission in Mali (MINUSMA), called for a shift in mindset to promote a gender perspective, given that few women are deployed in Mali’s security forces in the centre and the north. UNPOL is developing strategies to build women’s dormitories in some regions and providing training, as well as working to financially empower women through quick impact projects.