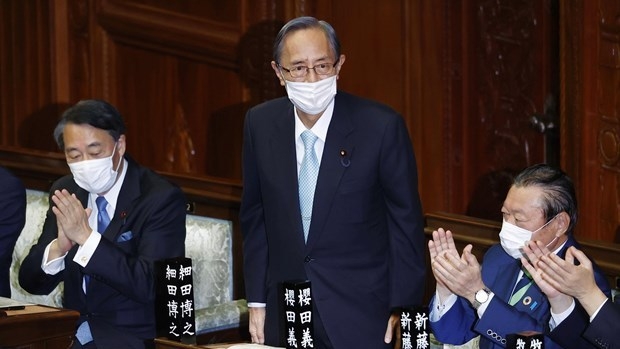 Hosoda Hiroyuki (centre) at a plenary session of Japan's National Diet on November 10 after his election as Speaker of the House of Representatives of Japan. (Photo: Kyodo)

NDO/VNA – Chairman of the National Assembly (NA) Vuong Dinh Hue has offered congratulations to Hosoda Hiroyuki on the latter’s election as Speaker of the House of Representatives of Japan.

In his congratulatory letter sent on November 10, NA Chairman Hue noted with pleasure that with common efforts by both sides, the “Extensive Strategic Partnership for Peace and Prosperity in Asia” between Vietnam and Japan has been developing strongly and practically in all aspects.

He expressed his belief that Hosoda will excellently fulfill his duty to help Japan continue developing prosperously.

The top legislator stressed that the NA of Vietnam and he wish to keep cooperating closely with the Speaker and the House of Representatives of Japan to help further strengthen the Vietnam-Japan friendship and cooperation in a comprehensive and sustainable manner, thus matching both sides’ interests, meeting their people's aspirations, and contributing to regional and global peace, stability, cooperation, and development.

NA Chairman Hue also voiced his hope to meet Hosoda soon to discuss the orientations for cooperation between the two countries, as well as between the NA and the House of Representatives of Japan in the time ahead.