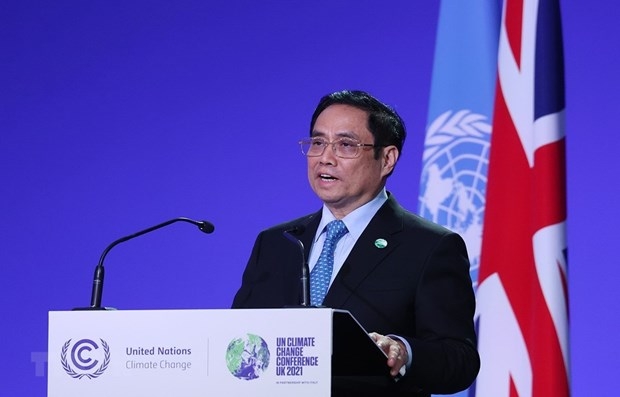 NDO/VNA - Vietnamese Prime Minister Pham Minh Chinh has called on countries to make strong commitments to reduce greenhouse emissions on the basis of common responsibility that suit their conditions and capacity, adding that there should be fairness and justice in climate change issues.

The Vietnamese leader made the call while delivering a keynote speech at the first working day of the Climate Summit, held within the framework of the 26th United Nations Climate Change Conference of the Parties (COP26) in Glasgow, Scotland (the UK) on November 1 (local time).

He affirmed that the negative impacts of climate change are seriously affecting food and water source security, and sustainable development, and even threatening the survival of many countries and communities.

It requires the international community to take stronger and more responsible actions without delay on a global scale, the PM stressed.

This is a global issue that requires a global approach, he said, adding that the issue affects everyone so a universal approach is needed.

The PM affirmed that response to climate change and natural recovery must become the top priority in every development policy, the highest ethical standard of every sector, business and person.

Science and technology must take the lead while financial resources must be used as a lever to promote the transformation of development models toward a green, circular, sustainable, inclusive and humane economy, he said.

According to the PM, every action must be based on nature and put people at the centre and consider people as the subject and driving force for sustainable development so that no one is left behind.

Developed countries must fully deliver on their financial commitments while setting out more ambitious financial goals after 2025.

The Government leader affirmed that, despite being a developing country that has just carried out its industrialisation over the past three decades, Vietnam, with advantages in renewable energy, will build and implement strong measures to reduce greenhouse gas emissions by using its own resources coupled with the cooperation and support of the international community, especially from developed countries, in terms of finance and technology transfer. Such measures include the implementation of mechanisms under the Paris Agreement to achieve zero emissions by 2050, he said.

The PM said Vietnam is making great efforts to respond to climate change, develop its economy, ensure a better life for all people, and make responsible contributions to the international community.

Vietnam wants to strengthen cooperation with the international community in sustainable investment and development programmes and projects in the time to come, he stated.

PM Chinh’s speech was highly evaluated by international friends and partners who affirmed their willingness to cooperate with Vietnam in deploying measures to promote green growth, circular economy, and support communities, especially vulnerable groups, in a bid to increase resilience and adaptability to unusual and extreme weather phenomena caused by climate change.

As a large-scale and top important international conference on climate change, the event drew leaders and representatives of 197 parties to the United Nations Framework Convention on Climate Change (UNFCCC), including over 120 heads of state and prime ministers, UN Secretary General Antonio Guterres, and leaders of international organisations and financial institutions, multinational corporations and non-governmental organisations.

At the event, leaders expressed their concern over the increasingly serious impacts of climate change on the Earth. They reaffirmed that the international community needs to take urgent actions right now, make stronger commitments and strive more to cope with the current climate crisis.

Today, 14:47
Worth checklist of Suzuki Ertiga automobiles in October 2022, Mitsubishi Xpander should additionally watch out due to the tremendous discount