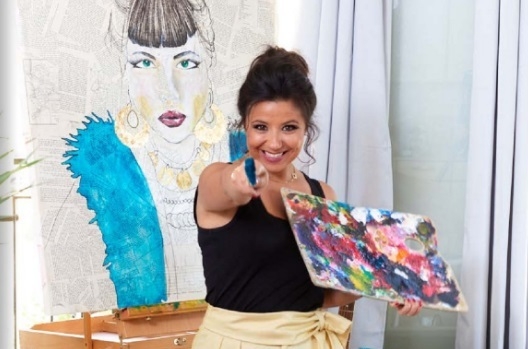 NDO/VNA – Paintings by French-Israeli artist Jennifer Amouyal are being showcased at the “Wanderlust” exhibition that opened on October 26 in Hanoi Cafe in Tel Aviv downtown.

Co-hosted by the painter and the Vietnamese Embassy in Israel, the exhibition's guest included ambassadors from many Asia-Pacific countries such as Thailand, the Philippines, Japan, the Republic of Korea and Australia, along with Israeli and international visitors.

The paintings feature Vietnamese landscapes such as Ha Long Bay, and the beauty of rural workers and Mong women in their traditional costumes.

Amouyal said that after one month travelling through Vietnam three years ago, she was deeply impressed by the culture and people of Vietnam, especially the Mong ethnic minority people in the northern Lao Cai province.

Dang Tu Anh, spouse of the Vietnamese Ambassador to Israel, expressed her hope that the paintings will give visitors an insight of the nation, culture and people of Vietnam, helping to enhance the mutual understanding, solidarity and friendship between Vietnam and Israel as well as international friends.

Amouyal said that she will use parts of money from selling the paintings to buy books for Vietnamese children and support poor women in Lao Cai. She also expressed her hope to soon visit Vietnam again.