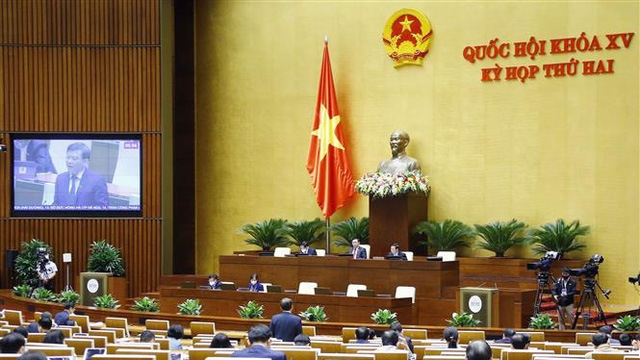 NDO/VNA – Lawmakers discussed the draft law on amendments and supplements to several articles of the Criminal Procedure Code via videoconference during the second session of the 15th National Assembly on October 25 morning.

Later in the morning, the legislators discussed in groups the revised draft Law on Insurance Business, which comprises eight chapters and 156 articles, and specifies seven groups of policies adopted by the Government under Resolution No.121/NQ-CP dated December 31, 2019.

Approving the comprehensive amendment of the law after 20 years of implementation, the deputies suggested that the work should remove bottlenecks and obstacles, helping the insurance market develop more equally and sustainably.

They proposed supplementing regulations on antitrust; strengthening the State management in insurance business activities; and revising the law in accordance with the trend of electronics and digitisation.

In the afternoon sitting, the lawmakers looked into the draft Law on amendments and supplements to several articles of the Statistics Law. Minister of Planning and Investment Nguyen Chi Dung clarified issues mentioned by NA deputies.

The deputies basically agreed with the need to such amendments in order to institutionalise the Party and State's guidelines, policies and laws on statistics work; and create a legal basis for timely data collection and assuring of the statistics’ objectivity and correctness, among others.

Minister Dung affirmed that the Government and the drafting agency will seriously take into consideration all valid opinions of the delegates and work closely with the NA Economic Committee in reviewing and completing the draft law.