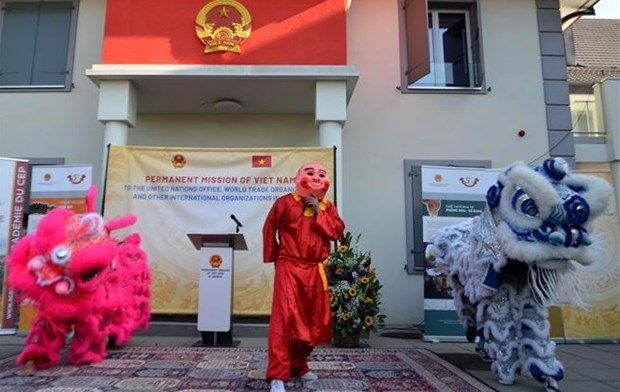 NDO/VNA – A Vietnam – Switzerland cultural festival took place on October 16 to celebrate the 50th anniversary of the two countries’ diplomatic relations (1971 – 2021), and enhance people-to-people exchange and cultural and economic cooperation.

Present at the event were Vice President of the Council of the State of Geneva Mauro Poggia, and Director-General of the World Health Organisation (WHO) Tedros Adhanom Ghebreyesus.

In her welcoming remarks, Vietnamese Ambassador to Switzerland Le Linh Lan highly spoke of the achievements in the bilateral relations, saying 2021 holds a special meaning as the year marks the 50th anniversary of the two countries’ diplomatic ties and the 30th anniversary of their development cooperation.

Switzerland was among the first Western nations to establish diplomatic relations with Vietnam, she said, noting the bilateral ties have seen dynamic development in all areas, from politics, diplomacy, trade and investment, to culture, education and training, and community exchange.

She further said that development cooperation projects funded by Switzerland have greatly contributed to Vietnam’s socio-economic growth and its realization of the UN Millennium Goals and Sustainable Development Goals.

Lan took the occasion to thank Switzerland for donating CHF5 million (US$5.4 million) worth of medical supplies to help Vietnam fight COVID-19. The donation demonstrates the solidarity with Vietnam in the time of hardships, she stated.

Ambassador Le Thi Tuyet Mai, Permanent Representative of Vietnam to the United Nations, the World Trade Organization and other International Organisations in Geneva, also expressed her delight at the growing friendship between Vietnam and Switzerland, saying from Geneva, the two countries have been actively promoting multilateralism and stepping up multifaceted cooperation.

Both ambassadors pledged that the Vietnamese Embassy to Switzerland and the Permanent Mission of Vietnam in Geneva will do their best to together with Swiss friends strengthen the long-standing friendship and partnership as well as economic and cultural exchanges between the two countries and their localities.

Mauro Poggia, Vice President of the Council of the State of Geneva, said the 50-year relations will lay a solid foundation for further bolstering the bilateral cooperation, particularly economics, trade, sustainable development and post-COVID-19 humanitarian assistance.

He unveiled that the Swiss Ministry of Foreign Affairs will sponsored the building of a world-class conference hall at the Diplomatic Academy of Vietnam, called Geneva Conference Hall. The gift is a tribute to international dialogue and “Geneva Spirit,” he noted.