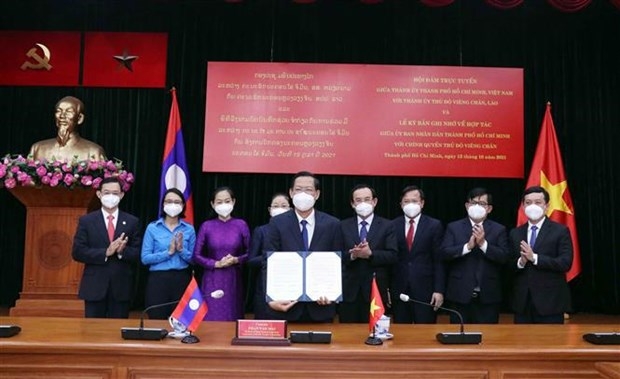 NDO/VNA – Leaders of Ho Chi Minh City and the Lao capital of Vientiane on October 15 held talks and witnessed the signing if a memorandum of understanding (MoU) on cooperation between the two authorities for 2021 – 2025.

At the talks, Politburo member and Secretary of the Ho Chi Minh City Party Committee Nguyen Van Nen, said the MoU helps identify the centres of the sides’ cooperation in the time to come.

Ho Chi Minh City will offer more scholarships and vocational training for personnel and people from Vientiane studying in the city, he said, adding that assistance for the Lao city in e-government building and trade-investment promotion will also continue.

Nen stated Ho Chi Minh City will do its best to foster its friendship with Vientiane in contribution to protecting the Vietnam – Laos special relations as well as developing the city’s ties with Lao localities.

He appreciated Ho Chi Minh City’s support for Vientiane to combat the COVID-19 fight in the past time.

He said he believes under the leadership of Vietnamese Party and Government as well as the city’s authorities, Ho Chi Minh City will soon overcome its current pandemic-induced hardship.

The Lao official recommended the sides pay attention to raise awareness of young people on the nations’ close and faithful ties; promote comprehensive collaboration in accordance with the countries’ special political relations; and strengthen economic, cultural, educational and scientific cooperation in a practical and breakthrough manner.

At the talks, the MoU was signed by Chairman of the Ho Chi Minh City People’s Committee Phan Van Mai and Vientiane Governor Atsaphangthong Siphandone, who reviewed the cities’ sound cooperation during 2016-2020.

Under the MoU, in the 2012-2025 period, the two cities step up the exchange of delegations, trade, economy, culture, and education; as well as the implementation of their investment-trade projects, including the establishment of a Ho Chi Minh City centre for commerce and tourism in Vientiane and vice versa.

Ho Chi Minh City will consider an assistance worth 500,000 USD for Vientiane’s project on reforming its budget collection system.

On the occasion, the Ho Chi Minh City-based Saigontourist Holding Company presented five scholarships worth VND1.5 billion (US$65,898) to Vientiane.