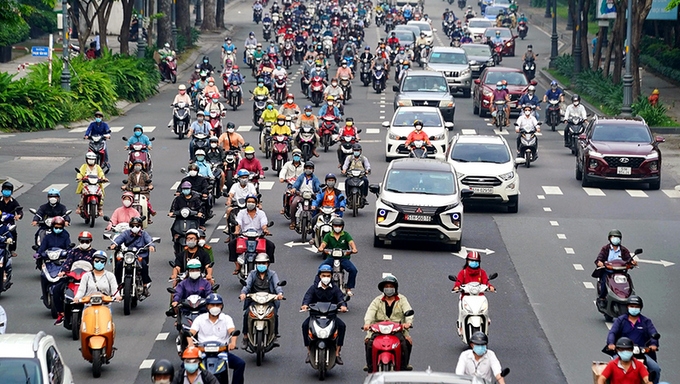 NDO – Thanks to the proper, flexible and comprehensive strategies, policies and measures launched by the Party, State and Government as well as the efforts of the whole political system, functional agencies, local authorities and people, the COVID-19 pandemic has been basically put under control nationwide.

In some localities that were previously marked as "hot spots" with complex outbreaks, the number of infections and deaths have decreased markedly. The social security, order and safety have been ensured; the people’s lives in epidemic-hit areas have been stabilised; and the people’s trust in the Party and State has been maintained.

Over the past few days, the normal rhythm of life began to return in many provinces and cities. The issues of public concerns have been in relation to the travelling of people; the return of people from Ho Chi Minh City and neighbouring provinces to their hometowns; transportation; the lack of consistency and transparency in technological platforms; omissions in taking care of people's lives; and the restoration of production and business activities. Therefore, localities, enterprises and people should continue to innovate their thinking and perform operations in line with the epidemic’s developments and requirements for socio-economic recovery and development.

Many measures were taken to adapt safely and flexibly to and control effectively the pandemic; help people return to work; take and receive people in need of returning to their hometowns; and ensure social security, traffic safety and social order.

On October 7, in order to promptly solve new problems, the Prime Minister sent Official Dispatch No.1314/CD-TTg to the chairmen of the People's Committees of the provinces and centrally run cities, ministers, and heads of ministerial-level agencies and agencies attached to the Government on taking and receiving people with necessary and legitimate needs of returning to home in a safe and thoughtful manner. As a result, the support for people returning their hometowns has been carried out in a convenient manner.

In addition, many measures have been carried out to help people adapt safely to the pandemic, gradually reopen production, business and services towards economic recovery. Many welfare policies and packages have been announced, focusing on supporting employees, employers and disadvantaged people who are affected by COVID-19.

As of September 21, 17.6 million people nationwide have received total VND13.8 trillion. On October 1, the Government continued to issue Decision No.28/2021/QD-TTg, associated with the aid package of VND38 trillion to support workers who are paying unemployment insurance. On October 7, the Vietnam General Confederation of Labour launched Decision No.3309 on providing nutritious meals for trade union members and workers who are implementing the enterprises’ anti-epidemic regulations in the localities under the Prime Minister’s Directives No.15 and 16.

In addition to taking care of the basic and essential demands of people affected by the COVID-19 pandemic, the Party and authorities have made efforts to ensure human rights and children's rights amidst the pandemic. In particular, the budget and advocacy sources have been used for psychological counselling and support of nutrition, medicine and learning supplies for people who were living in quarantine areas and social distancing rules. The relevant agencies have also made lists of orphans whose parents have died of COVID-19 to make plans for caring them. Notably, the national high school graduation exam was organised successfully.

In the new academic year, the Ministry of Education and Training directly issued a document guiding the exemption and reduction of tuition fees; and cooperated with the Ministry of Information and Communications to launch the programme “Internet and computer for children”. The Government has recently supplemented a mechanism for students living in difficult circumstances to receive preferential loans from a credit package worth VND7.5 trillion.

Along with the pandemic prevention and control, the Government has been implementing many solutions to help the economy eliminate difficulties caused by COVID-19. Even during the fierce days in the fight against the epidemic, the factories and enterprises in localities under social distancing ensured the principles of “safety to produce, production under safety”, “3-on-site model”, and “one road, two destinations” while maintaining their operations to fulfil the set schedules and goals.

In addition, the Government has also asked the ministries and agencies to create favourable conditions for the safe and smooth transportation and circulation of essential goods. Several proposals on removing difficulties for enterprises, such as tax exemption for business individuals and households, reduction of value added tax for businesses and reduction of ground price, are continuing to be considered to seek appropriate solutions.

In addition to great attention to spearhead industries, the Government has been considering and piloting essential measures to revive the service, entertainment and tourism sectors under the models of “green zone” and “green card”. Turning challenges into opportunities, a national strategy on developing a digital economy and society has been urgently completed, promising to create new breakthroughs. Therefore, despite severe impacts from the pandemic, Vietnam’s economy achieved a positive growth rate in the first nine months of this year. This figure signals “the light at the end of the tunnel”.

The above-mentioned practical and specific measures are convincing proofs for the effectiveness of epidemic prevention and control in Vietnam as well as the basis for refuting the false allegations of hostile forces that the Vietnamese Government only fights against the pandemic in an extreme method by blockade without taking interest in people’s lives.

Facing the unprecedented challenge from the epidemic, the Party, State and Government have been proactively setting out flexible policies and quick responses to promptly change the strategy as new developments have occurred. Accordingly, the principles of making “the people the centre of service and subject in the epidemic prevention and control”, putting “the people’s lives first”, and “leaving no one behind” have always been at the core of all policies.

With the motto of “proactiveness, flexibility, creativity, not perfectionism, not hurry, drawing experience while doing, and timely supplement and perfection in accordance with the situation”, the Party, State and Government have directed people to fulfil many important tasks, towards achieving encouraging results in COVID-19 prevention and control, which have been highly appreciated by the world.

Identifying the fight against COVID-19 pandemic as an urgent and long-term task, at the closing session of the fourth plenum of the 13th Party Central Committee, Party General Secretary Nguyen Phu Trong continued to emphasise the need to change the mindset and strengthen awareness of pandemic prevention and control in connection with recovering and boosting business and production activities. He also said that appropriate and feasible plans and scenarios should be built and integrated into socio-economic development, finance-budget and public investment plans for 2022. The Party leader urged for the prompt, flexible and effective adjustment of the financial - monetary policy and promotion of resources to ensure macroeconomic stability, major economic balances, the recovery of production and business, and the circulation of goods and labour, especially in the localities where social distancing has been applied for a long time; boost exports and domestic consumption; and strengthen both public and private investment.

At present, the COVID-19 pandemic is basically under control and has been gradually pushed back across the country. However, the epidemic may still be latent in the community. Therefore, if the agencies and people are subjective, the risk of threatening the results of the fight against the epidemic still exists.

It is crucial to combine the propaganda of anti-epidemic views, policies and measures by the Party and Government and the dissemination of knowledge on the pandemic prevention and control with the timely rejection of false and distorted arguments of hostile forces. In particular, press agencies should become an effective information “bridge” between the Party, State and Government and the people to help know, understand, trust and follow. Thus, the