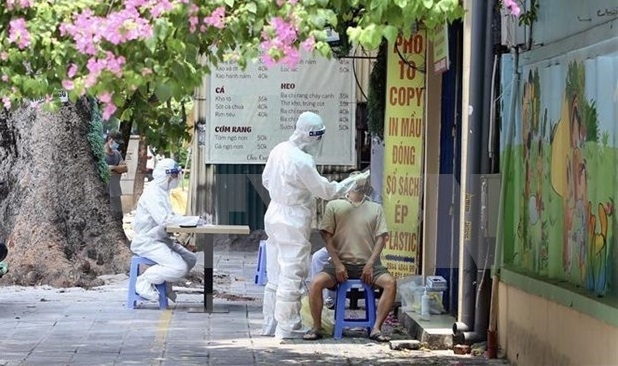 NDO/VNA – Vietnam recorded 4,513 new cases of COVID-19 on October 9, a drop of 293 cases compared to the previous day, according to the Ministry of Health.

Among these new cases, one was imported and 4,512 were local transmissions. Of these, 2,173 were detected in the community.

Ho Chi Minh City recorded the highest number of infections with 1,662, a reduction of 553 cases against the previous day. It was followed by neighbouring Binh Duong province with 820 and Dong Nai province with 575.

The national tally now stands at 836,134, including 831,523 cases recorded in the fourth wave of infection that has swept the country since late April.

According to the Ministry of Health’s report, 5,014 patients nationwide are in serious conditions, with 668 requiring invasive ventilation and 22 on life support (ECMO).

On the day, the country saw 105 deaths from the disease, including 74 in Ho Chi Minh City, 18 in Binh Duong, five in An Giang, three in Dong Nai, two each in Tien Giang and Tay Ninh, and one in Hanoi. The death toll now hits 22,442, accounting for 2.4 percent of total cases.

A further 1,319 patients were given the all-clear, taking the total number of recoveries to 760,801.

Almost 1.055 million vaccine doses were administered in Vietnam on October 8. The country has injected 51.96 million doses of vaccines to date, with more than 14.2 million people now fully inoculated.