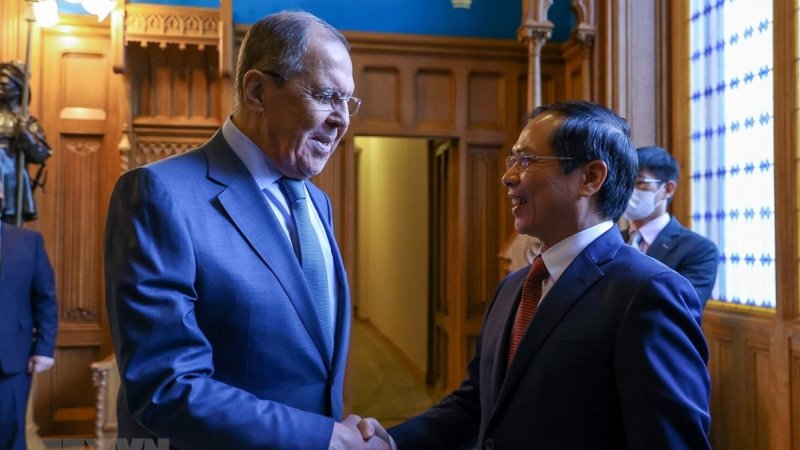 NDO/VNA - Vietnamese Minister of Foreign Affairs Bui Thanh Son held talks with his Russian counterpart Sergei Lavrov on September 28 as part of his official visit to Russia from September 25 to 28.

FM Son affirmed that the Vietnamese Party, State, and people always keep in mind and treasure the wholehearted support and assistance that the Russian people have given to the Vietnamese during the struggle for national liberation and reunification in the past and the “Doi moi” (Renewal) nowadays.

Vietnam consistently views Russia as one of its leading important and trustworthy partners, he emphasised.

Lavrov affirmed that Vietnam is a very important partner in his country’s foreign policy.

Both ministers held that the Vietnam - Russia comprehensive strategic partnership has kept developing dynamically despite obstacles caused by the COVID-19 pandemic. The political trust has been consolidated via online meetings and phone talks between senior leaders and officials from ministries and sectors of the two countries.

Growth has been sustained in economic and trade ties, with bilateral trade in the first half of 2021 rising 12.5 percent year on year to US$2.6 billion. The two sides have also actively cooperated with each other in the COVID-19 combat as seen in the sharing of medical supplies and equipment, according to the two ministers.

They agreed to increase mutual visits at all levels, especially those by senior leaders, and between their countries’ Parties, States, and parliaments; boost people-to-people exchange; further expand and intensify cooperation in all fields, especially defence and security; further tap into the free trade agreement between Vietnam and the Eurasian Economic Union, of which Russia is a member; and step up the implementation of key projects in the energy, oil and gas sector and expand the ties to the renewable energy industry.

Vietnam and Russia will create optimal conditions for businesses to access each other’s markets and invest in mutually beneficial sectors, strengthen cooperation in human resources development, and soon resume normal travel for their citizens.

Minister Son asked Russia to prioritise providing and transferring production technology of COVID-19 vaccine and drugs to Vietnam as agreed; further expand cooperation in medicine, space science, and management of natural resources; facilitate Vietnamese farm produce’s access to the Russian market; and bolster ties and exchange between their localities.

He also called on the Foreign Ministry and relevant agencies of Russia to continue creating favourable conditions for Vietnamese people to live, study, and work in the country, as well as to receive COVID-19 vaccination and treatment.

For his part, Minister Lavrov stressed that Vietnam is an important market of Russia in Southeast Asia, voicing his support for the Vietnamese counterpart's proposals and suggesting stronger cultural cooperation and people-to-people exchange.

He also appreciated Vietnam’s attention and assistance to ensure health safety for Russian citizens in the country.

At the talks, the two officials also discussed several international and regional issues.

They agreed that the two countries will keep reinforcing coordination at important multilateral organisations and forums, especially the United Nations and the Association of Southeast Asian Nations (ASEAN), and in responding to non-traditional security challenges.

They affirmed ASEAN’s centrality in an evolving regional architecture and underlined the importance of upholding and seriously complying with international law, including the 1982 UN Convention on the Law of the Sea, to regional peace, stability, cooperation, and development.

Minister Son invited his counterpart to visit Vietnam in the near future. Lavrov accepted the invitation with pleasure.