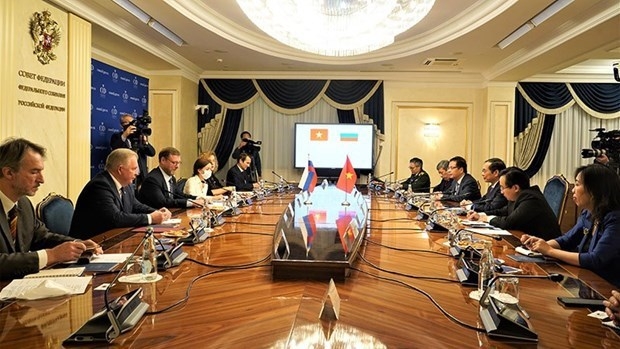 At the meeting between Minister of Foreign Affairs Bui Thanh Son and Konstantin Kosachev, Deputy Speaker of the Federation Council of the Federal Assembly of Russia (Source: baoquocte.vn)

NDO/VNA – Vietnam, the only country that President Vladimir Putin has visited for five times, is an important and close partner of Russia in Asia-Pacific, said Konstantin Kosachev, Deputy Speaker of the Federation Council of the Federal Assembly of Russia.

Kosachev made the statement at a meeting with Vietnamese Minister of Foreign Affairs Bui Thanh Son, who is on his official trip to the nation, on September 27.

At the function, both officials expressed their delight at developments in the Vietnam – Russia relations across all sectors and channels, including the parliamentary channel.

Despite COVID-19, the Vietnamese National Assembly and the Russian Federation Council have sustained their ties via online exchanges, most recently the talks between National Assembly Chairman Vuong Dinh Hue and Chairperson of the Federation Council Valentina Matvienko. The sides have aslo worked closely at regional and international forums such as the Inter-Parliamentary Union (IPU) and the ASEAN Inter-Parliamentary Assembly (AIPA).

Kosachev stated the Russian upper house backs the boosting of the Vietnam – Russia comprehensive strategic partnership in all spheres, as well as cooperation in accelerating the ratification and implementation of deals sealed between the nations.

He appreciated Vietnam’s aid of 50,000 face masks for the Federation Council when the pandemic broke out in early 2020 and Russia faced difficulties in producing the masks.

He vowed to do his best to speed up the supply of the Sputnik V vaccine for Vietnam. The official also thanked Vietnam for making the Russian language a subject in high schools from 2022, considering it a good premise for increasing the number of Vietnamese students in Russia in the future.

For his part, Son affirmed the bilateral parliamentary cooperation, particularly between their friendship parliamentarian groups, plays a significant role in deepening the countries’ comprehensive strategic partnership.

He said the Federal Council has actively supported collaboration between Vietnamese and Russian localities, with relations established and expanded toward practical outcomes. Son asked the council to further such assistance and back the nations’ people-to-people exchange.

On the occasion, the diplomat proposed the council raise its voice so that Russia prioritises vaccine supply and technological transfer for Vietnam and support for Vietnamese expatriates in country in the context of COVID-19.

Also on September 27, Son visited the military attache agency of Vietnam in Moscow and held a meeting with the Russian Direct Investment Fund.

Earlier, he laid flowers at the Ho Chi Minh monument in Moscow, visited the monument of unknown martyrs, and met representatives of the Vietnamese community in Russia and staff of the Vietnam Embassy in Russia.