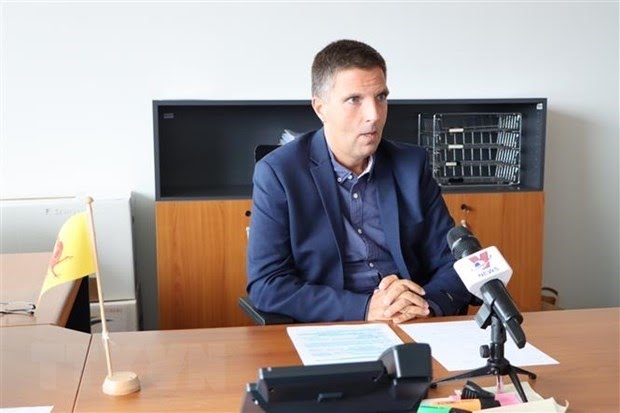 Nicolas Dervaux, Representative of the Governments of the French-Speaking Community of Belgium and the Walloon Region in Vietnam, gives an interview to the Vietnam News Agency (Photo: VNA)

NDO/VNA – Relations between Vietnam and the Wallonia-Brussels General Delegation in the country will continue to be reinforced and diversified in the time ahead, according to Nicolas Dervaux, Representative of the Governments of the French-Speaking Community of Belgium and the Walloon Region in Vietnam.

He was speaking in an interview granted to the Vietnam News Agency on the occasion of the 25th anniversary of the establishment of the Wallonia-Brussels General Delegation in Vietnam and the 50th founding anniversary of the Belgian French Community (September 27).

More than 30 high-ranking official visits have been made, helping to enhance their partnership, mutual trust, and experience sharing toward sustainable development, Dervaux noted.

The representative said promoting the projects that combining scientific research and economic development will be the top common priority of the General Delegation. Win-win partnerships will continue in various areas such as biotechnology, healthcare, and environmental protection. Besides, academic and cultural cooperation will also be enhanced further.

Highlighting the continued intensification and diversification of bilateral ties in the coming time, he said the General Delegation, the Wallonia Export-Investment Agency (AWEX), and the Vietnamese Ministry of Planning and Investment, relevant ministries and agencies are actively consulting with one another to consider the proposed cooperation projects in some strategic development areas of both sides.

Cooperation orientations for 2022 - 2024 will be identified basing on the Vietnamese Government’s priorities in the socio-economic development plan for 2021 - 2025 as well as the strengths of Wallonia-Brussels, Dervaux noted, adding that the level of traditional cooperation will be elevated and new cooperation fields created.

The Wallonia-Brussels General Delegation will also continue to focus on the cooperation areas that have proved fruitful, he went on.

Regarding the EU - Vietnam Free Trade Agreement (EVFTA) that took effect in August 2020, Dervaux said the General Delegation has been helping Vietnamese ministries and sectors to optimise relevant knowledge, which will help fuel economic development, investment and trade, and reduce difficulties and trade barriers.