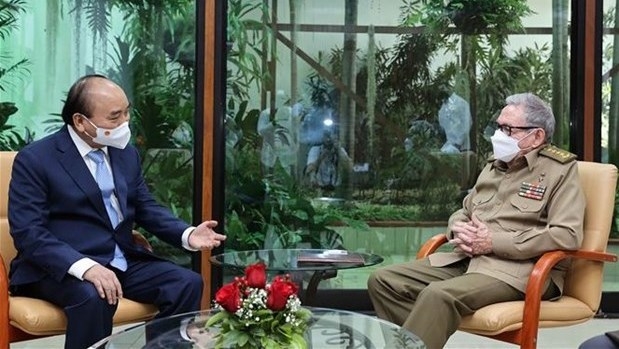 The President conveyed greetings of Party General Secretary Nguyen Phu Trong and other Party and State leaders, and the people of Vietnam to the Cuban General.

President Phuc and Gen. Castro Ruz recalled the latter’s first visit to Vietnam 55 years ago in his capacity as Second Secretary of the Communist Party of Cuba (PCC) Central Committee, which opened up a new period for solidarity and mutual support between the two countries.

President Phuc informed Gen. Castro Ruz about the contents of his talks and meetings with leaders of the Cuban Party, State and National Assembly during the trip, which are expected to deepen the special traditional friendship, and comprehensive cooperation between Vietnam and Cuba in a more effective manner.

The President reaffirmed Vietnamese’s solidarity and support to the Cuban people, and thanked the Caribbean nation for its timely assistance to Vietnam during the fight against the COVID-19 pandemic.

Cuba has sent doctors, presented treatment drugs and shared its homemade Abdala vaccine with Vietnam in the combat, he added.

According to the Vietnamese leader, the two countries reached an agreement on the supply and transfer of production technology of the vaccine, and are working on a cooperation plan regarding COVID-19 vaccines for children.

The Cuban General said he always keeps a close watch on Vietnam’s development, expressing his delight at achievements Vietnam has recorded.

President Phuc said he wishes to welcome the General to visit Vietnam again when conditions permit.