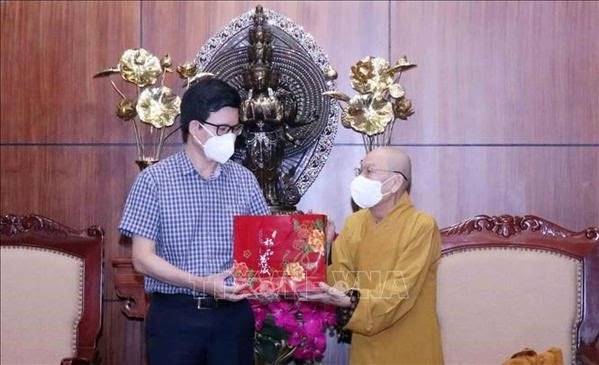 NDO/VNA – The Government Committee for Religious Affairs will always accompany Buddhist dignitaries and followers in Ho Chi Minh City in the fight against COVID-19, Vice Chairman of the committee Nguyen Tien Trong pledged at a working session with leaders of the Executive Board of the Vietnam Buddhist Sangha (VBS)’s chapter in the city on September 20.

Expressing sympathy over losses that the VBS in HCM City has suffered due to COVID-19, Trong hailed the engagement of Buddhist dignitaries and followers in the city's pandemic prevention and control activities as well as their contributions to the national COVID-19 vaccine fund and support to frontline forces.

He affirmed the efforts of the HCM City VBS’s Executive Board has shown that Buddhism always accompany the nation and uphold national solidarity amid difficulties. He expressed his hope that they will continue to take part in charity activities and assist the city in pandemic prevention and control.

For his part, Most Venerable Thich Thien Duc, deputy head of the Executive Board of the VBS chapter in HCM City, thanked the Government Committee for Religious Affairs and the city's authorities for paying great attention to Buddhist dignitaries and followers amid the complicated developments of COVID-19.

Since June, the board has worked online on digital platforms, maintaining its guidelines to Buddhist dignitaries in their operations, while adjusting the plans to organise the VBS Congress in districts as well as the celebration of the VBS’ 40th founding anniversary, said Venerable Thich Thien Quy, deputy head and General Secretary of the board.

He said that over VND500 billion (US$21.8 million) has been raised among Buddhist dignitaries and followers in the city for çharity and pandemic prevention and control activities. In the future, the boad will continue to join hands with the local authorities and agencies in the work, thus resuming normal life in the city soon.

Latter the same day, the Government Committee for Religious Affairs’s working team also visited and worked with representatives of the Cao Dai Tay Ninh Church in the city and the HCM City Cao Dai Church.