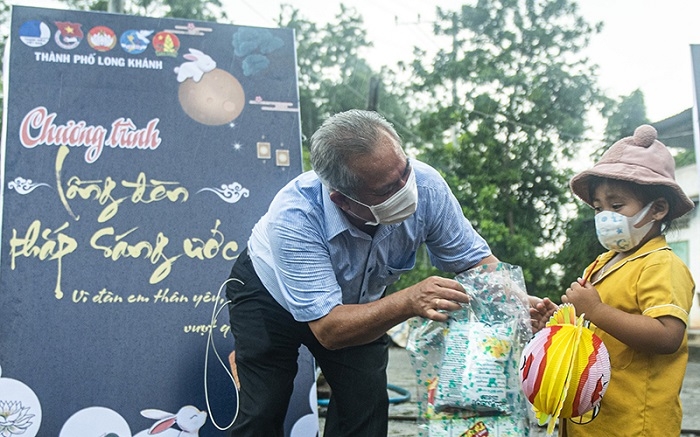 NDO - Many children across the country will not be able to enjoy Mid-Autumn Festival to the fullest as normal this year due to the complicated developments of COVID-19. Given this fact, authorities at all levels and benefactors have made efforts to bring a happy Mid-Autumn Festival to children, particularly those in the pandemic-hit areas.

Receiving a Mid-Autumn Festival gift from the local authorities of Ward 7, District 8, Ho Chi Minh City, Le Phi Toan, an eighth grade student residing in 178/ 76 Trinh Quang Nghi Street, shared that the gift and care helped him endure the pain of losing his mother and sister due to COVID-19.

Meanwhile, sisters Nguyen Thi Mong Tuyen and Nguyen Thi Thuy Trang, from Tan Long B Hamlet, Tan Thoi Commune, Phong Dien District, Can Tho City, who were born with congenital limb defects, expressed their delight to receive mooncakes, adding that they will share the cakes with family members and friends in their hamlet for the Mid-Autumn Festival celebration.

Nguyen Thi Nhu Y, an eight-year-old girl in Phu Thuan B Commune, Hong Ngu District, Dong Thap Province, whose parents have become jobless due to COVID-19, shared that it was like a dream for her to be presented with the wonderful gift package for the full-moon festival, including mooncakes, milk, and a rabbit-shaped lantern, from the commune’s youth union.

Witnessing the joy of H’mong ethnic children, who followed their parents from Ha Giang Province to work as rubber workers at An Vien Rubber Farm, Long Thanh District, Dong Nai Province, when they were granted gifts for Mid-Autumn Festival, Deputy Secretary of the Dong Nai Province Youth Union said that they feel like they have contributed a small action to bring cheer for the disadvantaged children.

The Provincial Youth Union has also coordinated with the provincial Fatherland Front Committee and the Women's Union to present 51,000 gifts worth more than VND5 billion VND to disadvantaged children in the pandemic-hit areas.

From September 15 to 18, the provincial youth members visited and gave moon cakes and lanterns to disadvantaged children at field hospitals, quarantine sites, and remote areas in the districts of Vinh Cuu, Nhon Trach, Trang Bom, Long Thanh and Bien Hoa.

The People’s Committees of wards 7 and 8 in Ho Chi Minh City have mobilised support from benefactors to hand over 360 gift sets, each comprising of mooncakes, milk, and school bags, to needy children, including those who lost their loved ones due to COVID-19 in the localities. Children who become orphans due to COVID-19 are also presented with VND1 million in cash. 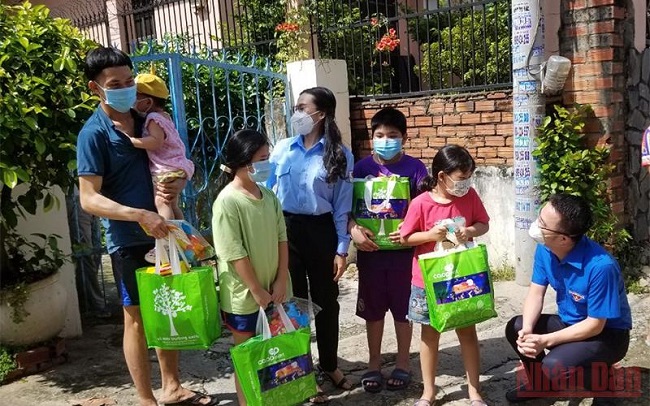 According to Nguyen Quoc Minh, Chairman of the Red Cross Association of District 8, the association in coordination of the district’s Buddhist Sangha and the IMC International Media Joint Stock Company have delivered 700 gifts to children in difficult circumstances in the district.

As part of the programme to care for children in special circumstances on the occasion of the Mid-Autumn Festival 2021, on September 17 the Ho Chi Minh City Youth Union visited and provided gifts to the children and students with difficult circumstances in the pandemic-affected areas in Thu Duc City.

Under the programme jointly held by the city’s Youth Union, the city’s Fatherland Front Committee, the Department of Labour, War Invalids and Social Affairs, and the Ho Chi Minh City Women's Union, a total of 5,000 gifts, 1,300 sets of textbooks, learning equipment, and 50 scholarships worth nearly VND2.5 billion in total have been presented to disadvantaged children and those who are receiving treatment against COVID-19 in the city.

Director of the Ho Chi Minh City’s Department of Labour, War Invalids and Social Affairs of Ho Chi Minh City, the joint efforts, sharing and practical actions made by social organisations, charity groups and benefactors have contributed to caring for disadvantaged children, helping them to overcome this difficult period of time.

In Can Tho City, the Department of Labour, War Invalids and Social Affairs has distributed 200 gifts, worth 200,000 VND each, to disadvantaged children in nine districts in the locality. The Department has also worked with businesses and benefactors to grant 130 presents, valued at VND200,000 – VND300,000 each, to children at welfare facilities and orphans.

On the occasion of the upcoming full-moon festival, the city’s Youth Union and the local Council of the Ho Chi Minh Young Pioneer Organisation have handed over 850 gifts to children under treatment at Can Tho Paediatrics Hospital and those living in the districts of Phong Dien, Thot Not, Binh Thuy, Cai Rang and O Mon.