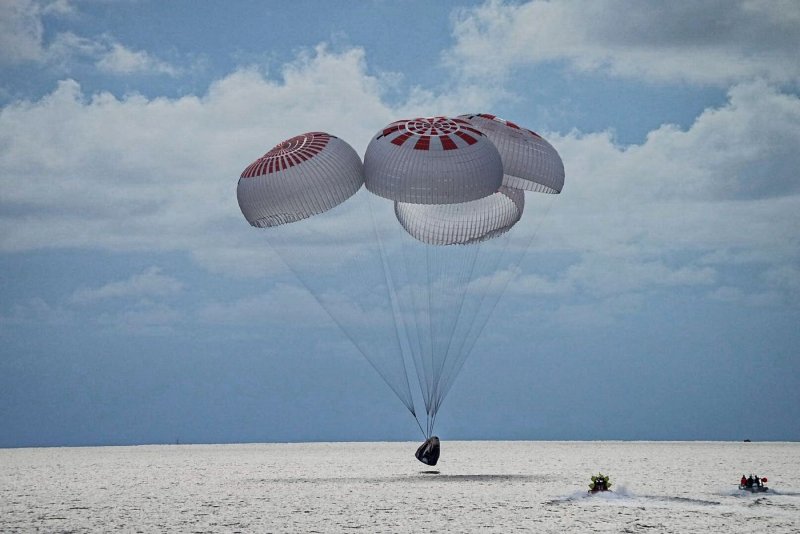 The first all-civilian crew to orbit the Earth splashed down in the Atlantic Ocean on Saturday, culminating a three-day journey aboard a SpaceX capsule that inaugurated a new era of privately financed space travel for non-professional astronauts.

The SpaceX Dragon fired thrusters to begin its entry into the atmosphere, a journey in which the vehicle experiences temperatures as high as 3,500 degrees Fahrenheit (1,927 degrees Celsius). It operates with six parachutes to slow descent, including four main parachutes.

The successful launch and landing was a proof-of-concept demonstration for Elon Musk’s Space Exploration Technologies Corp., greatly advancing the prospects of orbital space tourism, so long as affluent adventurers are willing to pay the astronomical sums SpaceX and other companies will be charging for the privilege. In July, billionaires Richard Branson and Jeff Bezos flew brief suborbital flights to space aboard vehicles built by the space companies they founded.

The Inspiration4 crew launched from Kennedy Space Center in Florida on Sept 15. They flew at an altitude of 360 miles (575 km) and setting a new record for how far the Dragon has ventured from Earth to date. The International Space Station orbits at about 255 miles above the planet.

The trip was led by Jared Isaacman, a technology billionaire who is chief executive officer of Shift4 Payments Inc., and three other U.S. citizens without specialized training. The Inspiration4 effort, a massive media campaign with a Time magazine cover and Netflix documentary series, also aimed to raise $200 million for St. Jude Children’s Research Hospital, with half of the total pledged by Isaacman.

“That was a heck of a ride for us, and we’re just getting started,” he said in a tweet.

SpaceX plans additional private flights, including one early next year for Axiom Space Inc., which is taking a retired NASA astronaut and three others to the space station for several days. The company also plans a trip to circle the moon with a Japanese entrepreneur and eight artists who will accompany him, as early as 2023.

Musk tweeted about the Inspiration4 flight going well and the mission’s social media accounts offered four photos from the Dragon on Thursday, but there has otherwise been little information provided about the flight. That’s in stark contrast to government-funded NASA missions, with their frequent public updates.

NASA engineers plan to inspect the vehicle to understand how it withstood radiation, micro-meteor impacts and the large thermal load from re-entry. The 27-foot-tall (8.2 meter) Dragon can carry as many as seven passengers.

SpaceX has flown Dragon crew and cargo capsules to space more than two dozen times since debuting in 2010, with most of those configured for resupply missions to the space station. Its last flight with NASA personnel was in May when four astronauts returned from the ISS.