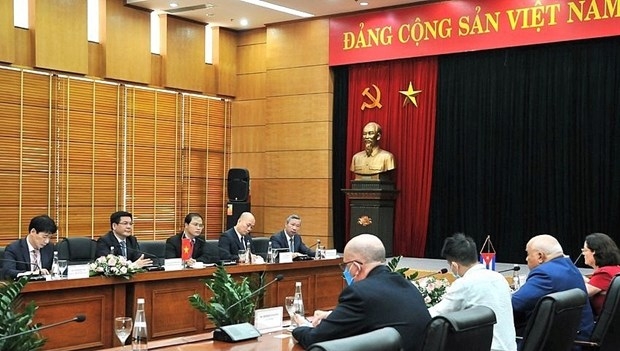 At the reception (Photo: VNA)

During a reception in Hanoi on September 17 for Cuban Ambassador to Vietnam Orlando Nicolas Hernandez Guillen, Dien wished that Cuba would continue tackling difficulties faced by Vietnamese firms when exporting to and investing in the Caribbean country.

He suggested that the Vietnamese Ministry of Industry and Trade (MoIT) and the Cuban Embassy in Vietnam should continue working closely together to bolster bilateral economic, trade and investment ties, so as to match long-standing political relations.

Both sides should further strive to help their business communities fully tap the Vietnam – Cuba trade agreement that took effect on April 1, 2020, the first of its kind that Cuba signed with an Asian nation.

The host proposed Cuba offer preferential policies to create favourable conditions for foreign enterprises and those from Vietnam in particular to invest in the country.

The Ambassador, for his part, emphasised Cuba’s attention to boosting collaboration with Vietnam in biotechnology and pharmaceuticals, which are strength of Cuba for many years.

He also wished to learn from Vietnam’s experience in developing solar energy and using advanced technologies in industrial development.

According to the MoIT, the two countries enjoyed two-digit growth in import-export turnover during 2015-2018. Two-way trade reached US$335.3 million in 2018, up 43 percent from 2017. Vietnam is investing in four projects worth US$51 million in Cuba.