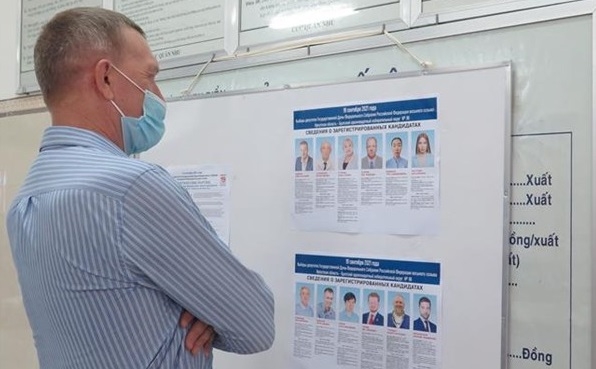 A Russian citizen at the voting station in Nha Trang city. (Photo: VNA)

According to the organisers, the current COVID-19 situation may affect the turnout. About 450 Russian citizens are expected to cast votes on the day. The voting lasts from 8am to 8pm on September 9.

Alex Krushchev, a Russian national in Nha Trang city, said he is delighted to exercise his right to vote during his stay in Vietnam. Amid the spread of COVID-19, local authorities have created optimal conditions for him and other Russian citizens to test for COVID-19 and cast their ballots.

In Russia, the voting is slated for September 19. (Photo: VNA)

Khanh Hoa is one of localities in Vietnam having a large number of Russian citizens. There are many Russian scientists working at the Vietnam-Russia Tropical Centre in Nha Trang city, which was established 30 years ago.

In Russia, the voting is slated for September 19.