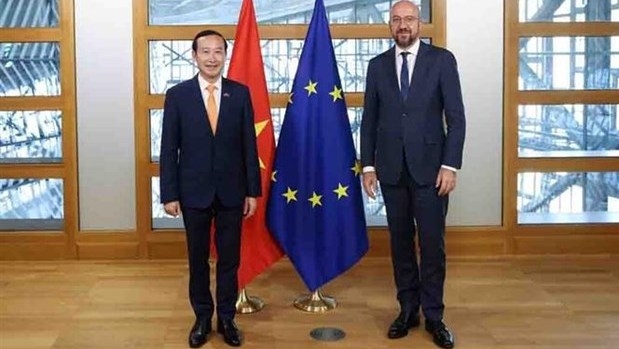 NDO/VNA – Vietnamese Ambassador to Belgium Nguyen Van Thao presented a letter of credentials from President Nguyen Xuan Phuc to King of the Belgians Philippe on September 8.

At the reception for the diplomat after that, King Philippe expressed his delight at the positive development of Belgium-Vietnam relations, and affirmed the need to expand cooperation through the frameworks of the Strategic Partnership on Agriculture signed in 2018 and the EU-Vietnam Free Trade Agreement effective from August 2020.

He appreciated the two countries’ cooperation at multilateral and regional forums such as the United Nations, the Asia-European Meeting (ASEM) and the International Organisation of La Francophonie, and their sharing of the importance of strengthening cooperation in ensuring security, safety and freedom of navigation in the region, including the East Sea/South China Sea.

Ambassador Thao affirmed his efforts to boost and deepen the bilateral relations in all fields. He conveyed President Phuc’s invitation to invite the King to pay a State visit to Vietnam in the near future, especially when the two countries celebrate the 50th anniversary of establishment of diplomatic ties in 2023.

He said that huge potential remains for the two countries to expand collaboration in trade and investment, especially in the fields that Belgium has strengths and Vietnam has demand such as renewable energy, seaports, logistics, digital economy and climate change.

The early completion of the ratification process of the EU-Vietnam Investment Protection Agreement (EVIPA) by Belgium and EU member states will bring many opportunities for interested Belgian businesses which want to invest in Vietnam and expand their presence to neighbouring countries, Thao noted.

He also took the occasion to thank Belgium's State, Government, organisations, enterprises and people for supporting Vietnam’s fight against the COVID-19 pandemic.

On the same day, Thao, who is also Ambassador and Head of Vietnam’s Delegation to the EU, presented a credential letter to President of the European Council Charles Michel, during which he affirmed that Vietnam treasures and hopes to intensify its comprehensive partnership with the EU – one of Vietnam’s leading important partners in all fields.

He pledged to do his utmost to continue developing the bilateral ties by boosting comprehensive economic cooperation, effectively implementing the EVFTA, and speeding up the ratification process of the EVIPA.

For his part, Charles Michel affirmed that the EU always attaches great importance to Vietnam’s role and position and its relationship with Vietnam, considering Vietnam its important partner in the region.

The EU will continue to cooperate closely with and support Vietnam in comprehensive and sustainable development, coordinate with and support each other at regional and international forums, especially within the framework of EU-ASEAN cooperation, in line with the EU's strategy on strengthening relations with the Indo-Pacific region.